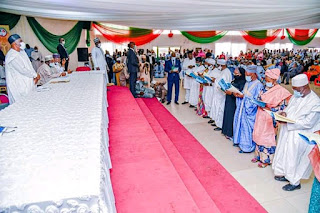 By Barnabas Augustine
24/11/2020
Governor Ahmadu Umaru has sworn in eleven new Permanent Secretaries Tuesday at Banquet Hall, Government House Yola.
The Permanent Secretaries who are to fill the vacancies available in the Civil Service emerged as the best from their respective Local Government Area after sitting for an examination.
In his speech at the ceremony, Governor Ahmadu Umaru Fintiri said Civil Service is at the heart of the over-all development Agenda of his Administration.; which was the reason his Government has introduced far-reaching reforms in the process of recruitment, promotion and appointment of Civil Servants.
He  maintained, his Government due process in employment to give every qualified Adamawa Citizen a fair chance.
“Equally fundamental is the introduction of examination for the selection of Permanent Secretaries from which you all emerge” Governor Fintiri said.
“To further ensure the integrity and credibility of the process, the qualifying examination was conducted by the Administrative Staff College of Nigeria (ASCON) Badagry.
“This has ensure a level playing ground so that every hard working civil servant can aspire to become a Permanent Secretary devoid of manipulations, sentiments or favoritism.
“For the avoidance of doubt, I have not interfered with the process and it is my desire that nobody should interfere in the process of appointment of Permanent Secretaries henceforth”.
Governor Fintiri appealed to civil servants in the state to be patience as COVID-19 has caused hindrance in implementing fully welfare package his Government proposed to them. He called on senior Civil Servant to continue to pass-on their experiences and expertise to their subordinates while workers to reciprocate the welfarist posture of his Government by being hardworking, diligent and productive.
He charged the new Permanent Secretaries as they resume at their various posts to be  mindful of the fact that Government reposes so much confidence in their ability to contribute to the current reforms it has commenced.
In his remark, the Head of Service Adamawa State, Dr Edgar Amos Sunday noted that introduction of examination in the Civil service has tremendous positive effect in the service. Adding, it has checked favouritism and other forms of malpractice in appointment of Permanent Secretaries.
He lauded Governor Fintiri for approving a competent
examination body, Administrative Staff College of Nigeria to take charge of examinations of civil servants in the state.
Responding on behalf of the appointed Permanent Secretaries, Mrs. Sosa Benson Ali thanked Governor Ahmadu Umaru Fintiri for finding them worthy to serve Adamawa. Saying his selection is in right direction.
She equally thanked Governor Fintiri for appointing considerable number of women as Permanent Secretaries while assuring their unflinching support and wealth of experience in their new office.
Those sworn in are Aminu Hamman Bello, Zainab Umar Adamu, Usman Hamma'ad Mapeo, Muhammad Dabo, Dorathy Nyanole Augustine, Gajere Japhet Ajiya, Saso Benson Ali, Felicia Jatau Bitrus, Bello Hamman Diram, Isuwa K. Misali and Ali Aggrey Bechur.
Oath of office and allegiance was administered by the  and Attorney General & Commission for Justice Adamawa, Barr. Afarimu Jingi.
11:39
Adamawa Daily Reports
Email ThisBlogThis!Share to TwitterShare to Facebook