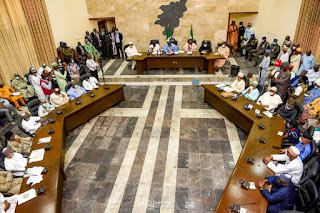 The North East Governors Forum Chairman, Prof. Babagana Umara Zulum has advocates the need to fashion ways to try terrorists in states where they committed the terrorism act.

Prof. Zulum made the advocacy at the opening of the third meeting of the North East Governors Forum Thursday at the Conference Hall, Government House Yola.

According to Governor Zulum, “At the moment, the process is a bit cumbersome as all suspects charged with terrorism and terrorist related offenses have to be transferred to Abuja for prosecution,  as  only   the Attorney-General of the Federation  has the statutory powers to prosecute terrorists; according to the provisions of anti-terrorism law”.

“So we need to obtain prosecutorial fiat from the Attorney-General to enable us prosecute those charged with terrorism in our respective States, instead of referring them to Abuja”.

Prof. Zulum noted that frequent security challenges bedeviling North East region include banditry, kidnapping, insurgency and rapping, adding the bastardize system of almajiri if not deal with at appropriate time will led to raising an army of untrained youths. Noting youth unemployment is increasing at arming rate in North East region, linking the phenomenon to the consequences of #EndSARS protest.

He said improvement on economic activities, education for the youths and creating job opportunities can tackle some of the security challenges in the region.

In his welcome remark, the host Governor, the Governor of Adamawa Rt. Hon. Ahmadu Umara Fintiri noted that the two meetings held by the North East region Governors in Gombe and Borno States has started yielding positive result in the development of the region.

He call on the authorities concern to change the negative narration of the region: empty the Internally Displaced Persons camps, return children to school, open commerce even in conflict areas to develop integrated economic that benefit all as well as return farmers to farm without been killed.