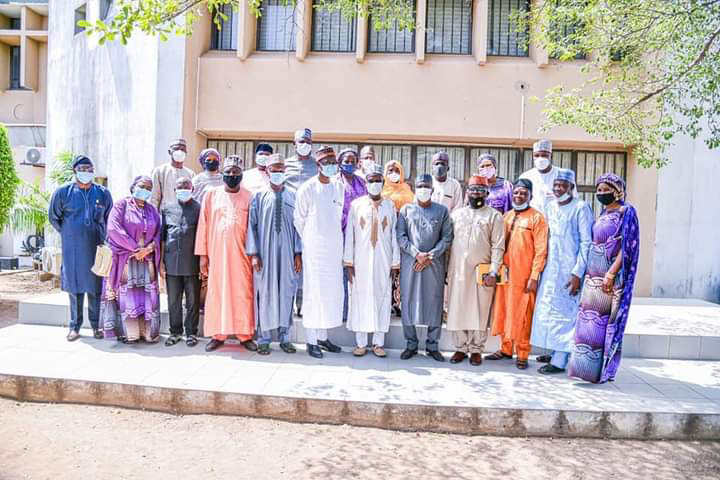 By Barnabas Augustine
2/2/2021
Adamawa State Governor Rt. Hon. Ahmadu Umaru Fintiri has disclosed that his administration will convert some selected schools in the State to science and technical schools so as to revive science and technical education in the state.
Responding while receiving Government Science Secondary School Hong Old Students Association Class of ’86 on a courtesy visit at the Council Chambers Government House Yola, Governor Fintiri said his administration will ensure skill acquisition which was gained through the technical colleges in the state are revived.
He stated that the reforms his administration is carrying on the education sector is yielding positive result. Disclosing that 82 percent of students who sat for the NECO examinations in the state have passed with at least five credits including Mathematics and English Language.
Governor Fintiri revealed that out of his government contribution for the year 2021 to the North East Development Commission, it will request for the construction of three Comprehensive Model schools in the State; one for each of the zones. He said in the Northern Zone it will be constructed in Mubi South, Song will have that of the Central Zone while that of Southern Zone will be sited in Guyuk.
The Governor said his administration is making a mark because of the multi-sectorial and all inclusive government his administration is running.
Government Science Secondary School Hong Old Students Association Class of 86 led by the Chairman Board of Trustee GSS Hong, Dr. Garbage Isa said they were at Government House Yola on a courtesy visit to salute Governor Ahmadu Umaru Fintiri for the giant stride his administration is achieving in all sectors of human and capital development.
He lauded Governor Fintiri for his education policies which he said is taking the State to greater level, while thanking the Governor for finding some of the association’s members worthy, appointed them to serve in his administration in different capacity.
Dr. Isa appeal to Governor Fintiri to consider reverting GSS Hong along side other selected schools in the State to Science Secondary Schools so as to regain the lost glory of science knowledge.
23:38
Adamawa Daily Reports
news update
Email ThisBlogThis!Share to TwitterShare to Facebook