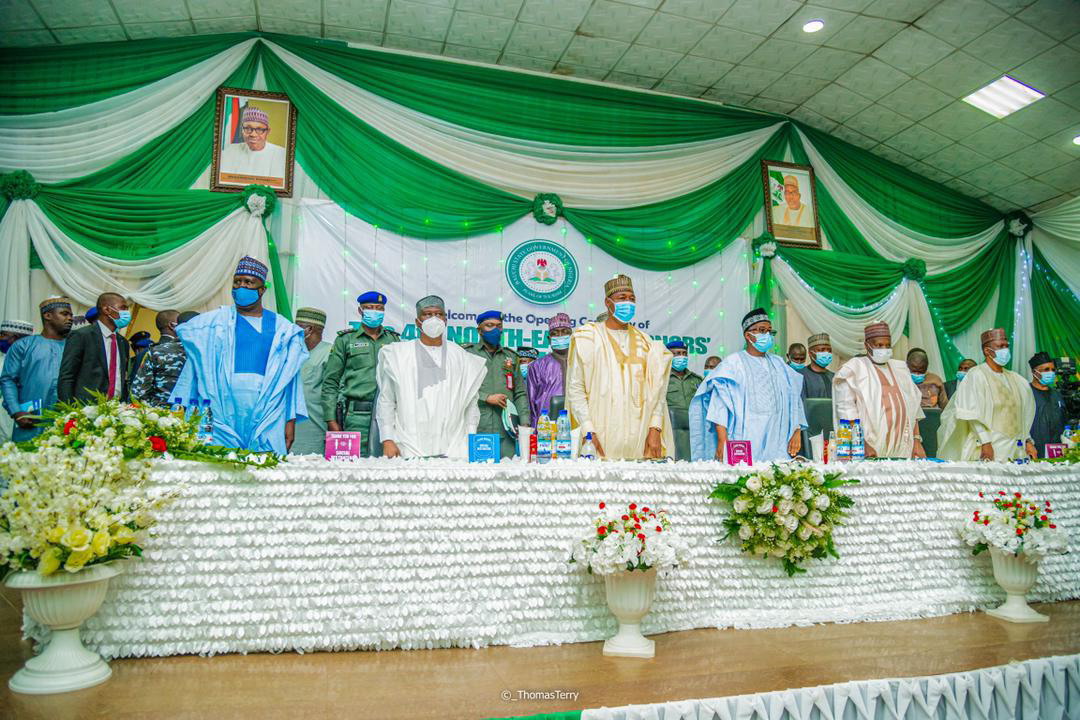 By Barnabas Augustine
3/3/2021
The fourth North East Governors’ Forum has been declared opened in Bauchi with a call for Federal Government of Nigeria to seek military support from neighbouring Countries of Chad, Niger and Cameroon to help bring to an end the activities of terrorists in the region.
The meeting which was hosted by Bauchi State has in attendance the Chairman of the Forum who is the Governor of Borno State Prof. Babagana Umara Zulum , Deputy Chairman of the Forum Adamawa State Governor Rt. Hon. Ahmadu Umaru Fintiri, Governor of Bauchi Sen. Bala A. Mohammad, Gombe State Governor Alhaji Muhammed Inuwa Yahaya,  Governor Darius Dikson Ishaku of Taraba State represented by his deputy  Haruna Manu and the Governor of Yobe State Alhaji Mai-Mala Buni who was represented by his Deputy Idi Barde Gubana.
In his speech, Wednesday at the opening ceremony of the fourth North East Governors’ Forum, at the Banquet Hall Government House Bauchi ,  the Chairman of the Forum, Governor  Babagana Umara Zulum said the security challenges of the north east region ranging from poverty, insurgency, banditry, kidnapping, armed robbery are endless but the Governors of the region are on right track to ending them having realized the challenges.
Decrying the endless attack by the insurgents on the citizenry, Governor Zulum maintained that Nigeria’s neighbours can help in tackling the activities of the Boko Haram  in the region.
He call for the Federal Government to look at the possibilities of inviting mercenaries to help tackle the security challenges of the rgion.
Adding, the local vigilante groups who are familiar with the region’s terrain better than the professional military if recruited into the military, they will help enormous in combatting the insurgents.
The Chairman of the Forum expressed optimism that the appointment of the new service chiefs with some of them served at the theatre of operation will help to improve the security challenges while charging them to device new mechanism to counter security breach.
He called on the relevant authorities to protect critical infrastructure in the region from been destroyed by the insurgents. Stating if destroyed, it will further thwart the economy growth and development of the region.
While condemning the abduction of school children by armed bandits in some states in Nigeria, Governor Zulum enjoined stakeholders to provide necessary protection to school children and other alternative safeguard means through converting boarding schools to day.
Governor Babagan Umara Zulum decried the residual power of the Attorney General of the Federation to only tried terrorism case. Governor Zulum called on the  AGF to delegate his power by given a State fiat to try terrorism case. He added that the process is delaying prosecution.
He thanked the British High Commissioner to Nigeria Catriona Laing for honouring the Fourth Governors’ Forum despite her tide schedules.
In his welcome address, the host Governor  Sen. Bala Abdulkadir Mohammed of Bauchi said the unique spirit of understanding and brotherhood has brought North East region under one umbrella to discuss matters affecting the region.
He decried the incessant security challenges bedevilling the sub-region which he said will form part of the Governors’ Forum deliberation.
Governor Mohammed expressed his dismayed over what the Federal Government allocated to North East region in the 2021 budget. According to the Governor only zero point three percent was allocated to North East region for capital infrastructure which will not make a mark in building the region that was devastated by insurgents.
It is expected that at the end of the close door meeting of the North East Governors’ Forum, a communique will be issued on the resolves of the Governors.
09:11
Adamawa Daily Reports
News
Email ThisBlogThis!Share to TwitterShare to Facebook