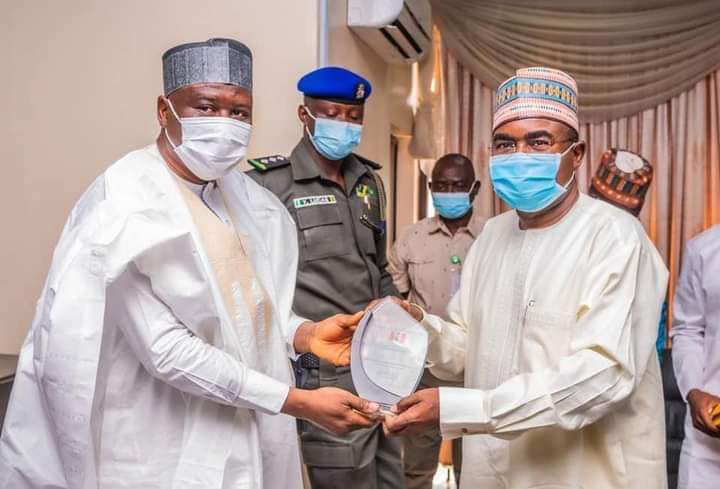 By Barnabas Augustine
1/3/2021
Governor Ahmadu Umaru Fintiri of Adamawa State has lauded the President of the Federal Republic of Nigeria, Muhammadu Buhari for appointing Brigadier General Muhammad Buba Marwa as Chairman and Chief Executive Officer of the National Drug Law Enforcement Agency.
He described the new NDLEA boss as a competent administrator who can help in combating drug abuse having the Brigadier General proven his efficacy when he was the Governor of Lagos State.
The Governor made the commendation on Monday while receiving the delegation of the NDLEA on a courtesy call at the Council Chambers, Government House Yola.
Governor Fintiri applauded Brig. General Marwa for carrying its responsibility diligently. He said, the NDLEA boss who is an Adamawa indigene is making the State proud through his effort demonstrated in tackling drug abuse; reclaiming the mandate of NDLEA.
He noted that drug abuse kills a nation, maintaining that criminal activities perpetrating in the country were carried out under the influence of illicit drug, while stating that NDLEA is central to the survival of the nation.
Governor Fintiri said his Government is working harmoniously with the State command of the NDLEA in the fight against drug abuse.
He assured that his led administration will continue to support the State Command of the NDLEA within the limited resources it has; build a rehabilitation centre and extended it to the 21 LGAs of the State.
He call on President Buhari to consider more funding of the NDLEA so as to help the Agency check taking of illicit drug.
Earlier in his remark, the Chairman and Chief Executive Officer of the NDLEA, Brig. Gen. Muhammad Buba Marwa (rtd.) said that he was in Adamawa State to familiarize himself with the State Command of the NDLEA and assess its facilities.
He commended Governor Ahmadu Umaru Fintiri for embarking on laudable projects that is transforming the State. And, thanked the Governor for supporting the State Command of the NDLEA in its fight against drug abuse. Noting that Adamawa is among the few States that co-opted NDLEA in its Security Council meeting.
Brig. Gen. Marwa revealed that within the shortest period he take charge of NDLEA, he renewed the Agency’s vigour in interrupting the chain of supply of illicit drug through the Agency’s new maxim “Offensive Action”.
He said over Sixty Billion Naira worth of illicit drugs were seized within the period he assumed office, with Edo State recording highest seized of over 200 tones and 100kg of cocaine.
The NDLEA boss assured to take the fight against drug abuse to dealers’ hide out.
He appealed to Governor Fintiri to consider provision of more operational vehicles to the State Command, establish rehabilitation centre and strengthen it as well as expand it to LGAs.
17:38
Adamawa Daily Reports
News
Email ThisBlogThis!Share to TwitterShare to Facebook