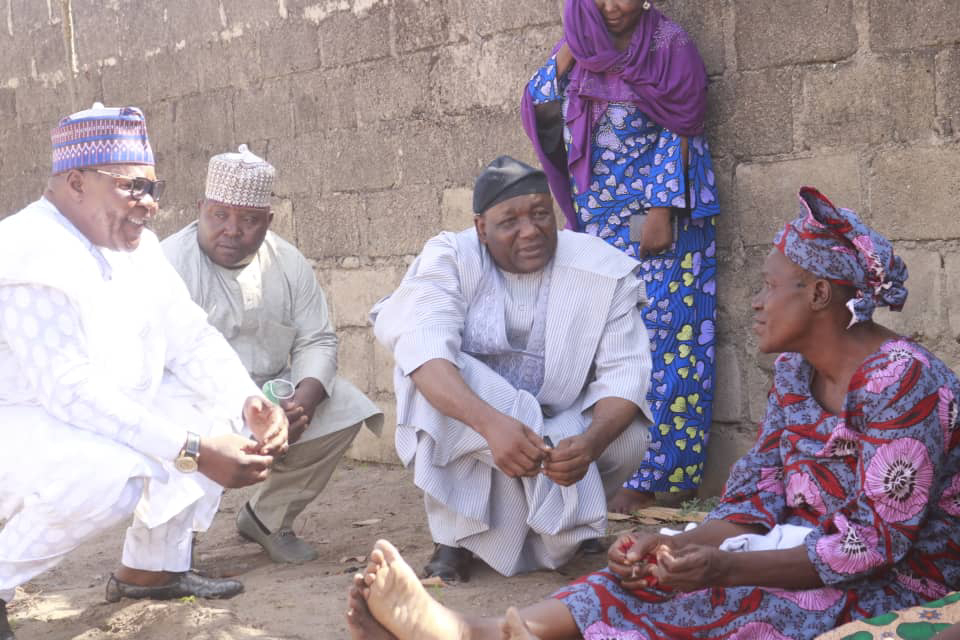 By: Yusuf Umar
Deputy Governor Chief Crowther Seth has commiserated with the family of late Air Commandore Shippo Bigila Naniwono retired, describing his demise as a great loss to the family, Numan federation and the state at large
The Deputy Governor also took turn to sympathise with other bereaved families in the area
The number two citizen of the state, Chief Crowther Seth alongside the member representing Lamurde in the state Assembly Mbauna Miyandasa and the state focal person sustainable development goals Mark Balanso among other officials were in Dowaya community of Demsa local government to condole the family of late air commandore Shippo Bigila Naniwono retired.
While at the family residence of the deceased, the deputy Governor Chief Crowther Seth sympathized with the bereaved family and encouraged them to see it as an act of God.
He described the departed as a fallen iroko tree who lived a fulfilled life, reminding those he left behind to emulate his good legacies.
The deputy Governor however, prayed  God to grant the deceased eternal rest and the family the fortitude to bear the irreparable loss.
The sympathetic leader alongside his entourage proceeded to Imburu community of Numan local government before he also moved to Lamurde local government on the same mission.
Chief Crowther extended his heart felt condolence to the family of late Clarkson Bindi who passed away on 10th May, 2021, and the family of late James Habba Alson who died at 72.
The deputy Governor who is equally the Nzeanzo of Bachama Kingdom advised those they left behind to seek comfort in God.
He assured them that the fresh air government is with them in  their trying moment.
Representatives of the families appreciated the deputy Governor Chief Crowther Seth for standing by them during their moment of grief.
05:56
Adamawa Daily Reports
News
Email ThisBlogThis!Share to TwitterShare to Facebook