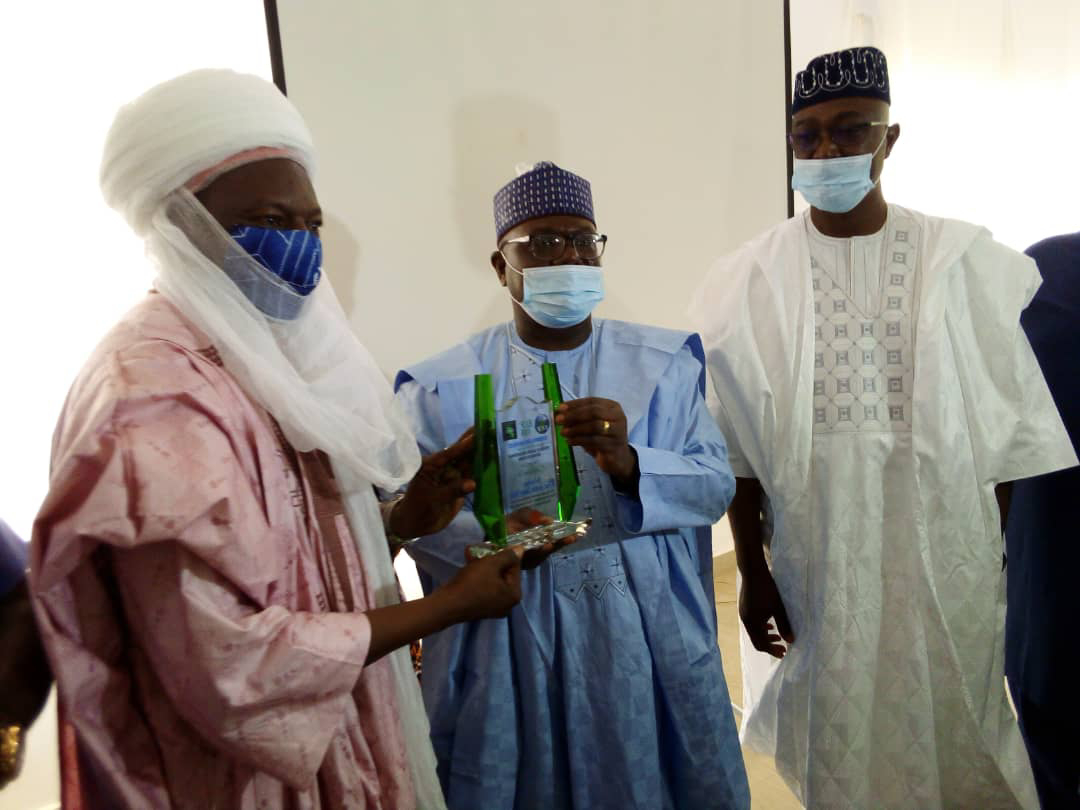 By Barnabas Augustine
17/5/2021
The Environmental Care Foundation ECF a Non Governmental Organization NGO has rewarded Adamawa State Governor, Rt Hon. Ahmadu Umaru Fintiri with an Award of Excellence for his exemplary performance in the areas of urban renewal, rural development and inclusive Government.
The Award was presented to the Governor during a workshop tagged "Humanitarian and Development Nexus and the New Way of Working" organised by the ECF in collaboration with Network of Adamawa Non Governmental Organizations NANGO.
The event held at the American University of Nigeria AUN hotel where the district head of Belel and Dan Lawan Mubi, Alhaji Abubakar Murtala presented the award to Governor Umaru Fintiri on behalf of the ECF.
In his remarks, Governor Umaru Fintiri congratulated the ECF at its tenth year celebration and expressed appreciation with the award presented to him which he said will spur him to give his best to the state for the betterment of the people.
The Governor represented by the Chief of Staff Government House, Yola Professor Maxwell Gidado charged the one hundred and fifty stakeholders participating at the workshop to come up with ideas that will move the state forward.
He said the intervention programmes by the ECF in the areas of education, youth and women empowerment, as well as Agriculture in Adamawa are inline with the eleven point agenda of the Fintiri led administration in the state.
While commending ECF for its ten year impacts in more than ten local government areas in the state, Governor Umaru Fintiri said Adamawa is an agrigarian state which if potentially harnessed, the expected food produce will feed the entire Nation.
He described the workshop as timely and advocated for the NGOs to synergize and come up with something that will assist the state at a time when government has put in place measures towards salvaging the state from underdevelopment.
The Executive Director ECF, Mr Yohanna Moses said the Award confered on Governor Umaru Fintiri was to recognize his exemplary performance in many sectors which has changed the narratives across the nooks and crannies of the state.
He revealed that in twenty nineteen, ECF in collaboration with another NGO has strengthened the agro enterprise of vulnerable women headed households in Hong for rain-fed and that of Mubi North and South for dry season farming among other local government areas.
The Executive Director enumerated that the ECF has also provided educational materials, implemented a six-month's pilot peace building project in Michika and launched Green Adamawa Project GAP of planting four million trees in four years.
Earlier in his welcome address, the Chairman Network of Adamawa Non-government Organizations NANGO, Ambassador Peter Egwudah said the workshop was to bring NGOs together to put hands on deck for increased humanitarian activities.
22:49
Adamawa Daily Reports
News
Email ThisBlogThis!Share to TwitterShare to Facebook