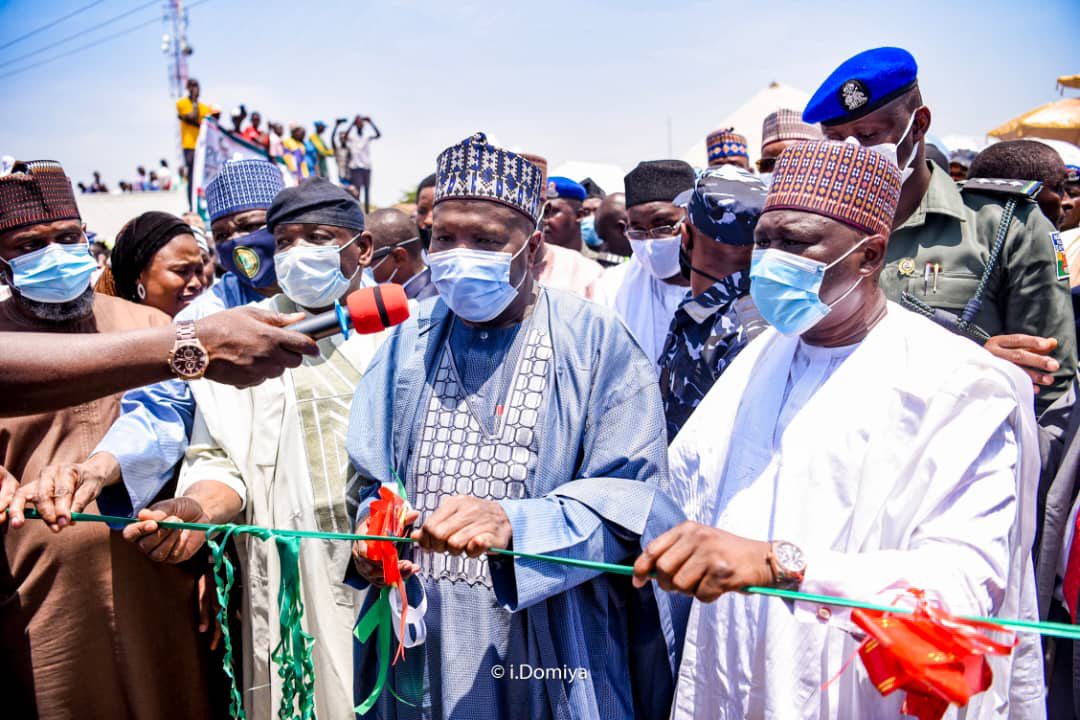 By Barnabas Augustine
19/5/2021
The Governor of Gombe State, Inuwa Yahya has commissioned 3.5km Izala-Gweda Malla -Rafa-Wayam township road in Numan.
The Governor lauded the giant stride of Governor Ahmadu Umaru Fintiri of Adamawa State in infrastructural development across the state.
Speaking Wednesday at Gwaida Mallam in Numan where the road was commissioned, the Governor of Gombe described Governor Ahmadu Umaru Fintiri as a man of his word. He said Governor Fintiri has distinguished himself by providing dividends of democracy to his people.
While thanking Governor Fintiri for inviting him to commission Numan township road, Governor Yahaya stressed that Adamawa and Gombe States are one and maintained that his invitation to Adamawa State will strengthen cordial relationship the two State have enjoyed.
Governor Yahya  called on the two communities of Waja and Lunguda in Adamawa and Gombe States to live peacefully. According to him, the two warren communities are brothers who coexisted from time immemorial.
In his speech, the Governor of Adamawa State, Rt. Hon. Ahmadu Umaru Fintiri said that his administration is compelled to construct Gweda Mallam Road in his pilot project because  of the perennial flooding which the residents have endured in the preceding years.
He said because of the hardship people of the community had suffered, his Government has decided to construct Gweda Malla road alongside Michika township roads- which are outside the state capital- to be among the pilot roads to be constructed.
Governor Fintiri disclosed that the road was constructed according to specification.
“I am excited to note that the contractors have done a good job by constructing a standard road with the civil specification to address the perennial flooding that have bedeviled this area” Governor Fintiri said.
“While we continue to make progress in virtually all critical sectors, as your servant, I understand that Government cannot address all the problems of our citizens at once. This is because what concerns my Government is touching the lives of the people. I am glad that apart from what we have done in Gweda Mallam, the upgrade of the Numan General Hospital is progressing steadily, hopefully this too will be come on stream soon.
“We have also addressed the rehabilitation of schools and the provision of Maternities and Healthcare Cenres”.
Governor Fintiri said sustainable peace is the topmost priority of his administration.
“All these will amount to little without the deliberate commitment of my Government to promoting peaceful co-existence in the Numan Federation” Governor Fintiri said.
“For me personally, peace building is a process not an event. This is why the Government has insisted on bringing our people together regardless of tribal and religious differences”.
In their separate goodwill messages, the Senator representing Southern Senatorial zone, Senator Binos Yaroe and Member representing Numan, Demsa and Lamurde in the National Assembly Barr Kwamoti Laori lauded Governor Fintiri led administration for bringing a lasting solution to the perennial flooding that had caused havoc to the benefitting community.
Earlier, Adamawa State  Commissioner of Works and Energy, Honourable Adamu Atiku said that Gwaidamala-Izala.... road which was flagged off for construction on Augustine 10, 2020 was constructed according to specification and time frame.
14:17
Adamawa Daily Reports
News
Email ThisBlogThis!Share to TwitterShare to Facebook