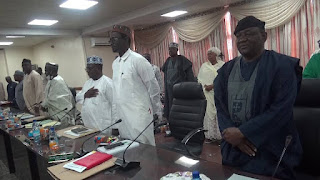 The Adamawa State Executive Council has restated its commitment to support farmers in the provision of Farm implements to raise the yield of their produce for food sufficiency and security.

This was disclosed at the end of the 7th Executive Council meeting of 2021 presided over by the Deputy Governor, Chief Crowther Seth at the Council Chambers Government House, Yola.

The seventh Council meeting presided by the Deputy Governor received two memo's from the Ministry of Land and survey on the need to establish information and geographical system in the Ministry while the other from the Ministry of Agriculture is informing the council on the prevalence of food insecuriy, particularly in 19 Local Government Areas of Adamawa.

Addressing newsmen shortly after  the meeting, Commissioner of Agriculture, Umar Daware said after due deliberations on the two memo's, the Council has adopted and noted that going forward, the State Government will support farmers in the provision of farming implements, explaining that the memo from the Ministry of Land and Survey was stepped down for lack of content and was advise to be repackage against the next council meeting.

He also informed newsmen that based on the update received from  consultants, the state government has finally gotten the credit rating of the business bond for the ongoing agribusiness.

The Commissioner also revealed that the council has received a report from committee earlier set up to revitalize the fertilizer blending plant, requesting the state government to fully resuscitate the plant and privatize it for efficient management purpose.