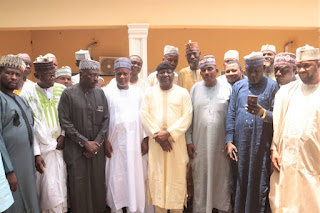 The officials of the Union led by its President of the Nineteen Northern States, Ibrahim Muhammed, Eighty Six gave the assurance during a courtesy visit on the Deputy Governor, Chief Crowther Seth.

Receiving the officials of the traders Union led by its newly elected President of the Nineteen  Northern States, Ibrahim Muhammed Eighty Six  in his office,  the Deputy Governor  congratulated him, describing his emergence as well  deserved.

Addressing them on behalf of Governor Fintiri, he said Government will continue to support the traders Union as they contribute emensely to the economy of the State and the country in general.

While urging the newly elected President of the Northern traders Union to justify the confidence reposed in him, he thanked those who stood by him to see to his success, assuring the Fresh Air Administration's readiness to work with the new leadership for the overall development of the Union and the state.

Speaking earlier, the President, Ibrahim Muhammed Eighty Six said being the son of the soil, he deemed it worthy to identify with Governor Ahmadu Umaru Fintiri's administration.

He described his emergence as a great achievement to traders and the State in general, soliciting for support from it Members and Adamawa State Government as he pilot the affairs of traders in the Nineteen Northern States.

The President how ever, noted that unity is Paramount, hence the need for Members to work in unity and harmony to achieve a desired goal.

Ibrahim Muhammed Eighty Six further frowned at the level, insecurity affected businesses in northern Nigeria, promising to join hands with government and security agencies to see how best to nib the problem in the bud for businesses to thrive.