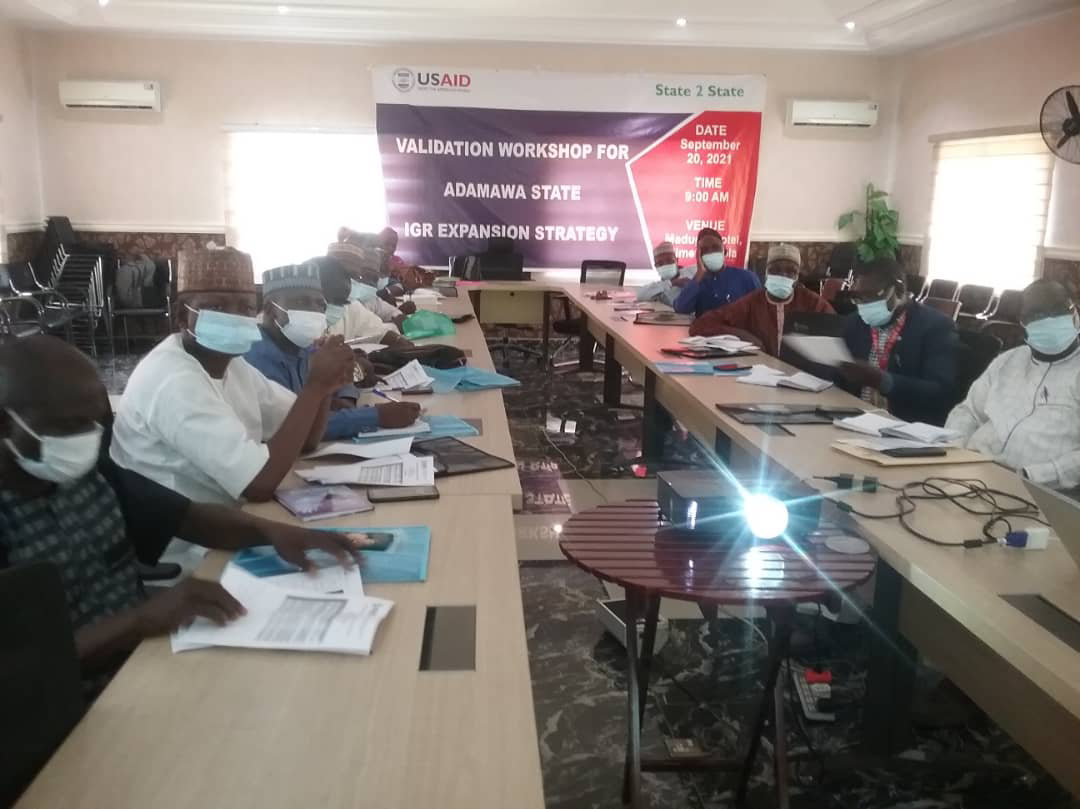 20-8-2021
BY: AISHA SA’AD
USAID State Accountability, Transparency and Effectiveness Activity  has organised a one day workshop for stakeholders in Adamawa State on Internal Revenue Generation Expansion Strategy Validation. Held at Madugu Hotel,  Jimeta -Yola.
In an opening remarks at the workshop by the State team lead Mr. Machill Maxwell, said’ the workshop is a weke  up call for state Government to plan on how to generate more revenue to embark on developmental projects. It  will also expose participants on certain  grey areas that were not captured for revenue generation.
The workshop is geared towards supporting tax reforms which will eventually sustain increase of state Internal revenue generation especially non tax internal revenue generation sources, ensure investment in specific sectors of Health, Education,  Water, Health and sanitation,  ensure enforcement of world Bank disbursements linked indicator on internal revenue generation collection to achieve uniformity and state wide harmony and accuracy of balances, development of a change management plan  to support implementation and among others.
In their separate Goodwill messages, the Chairman, Adamawa State Board of Internal revenue , Mal. Hamman Adama Njabari, represented by  Director of Taxes  Mal. Salihu Kekuni, lauded  efforts of the organisers of the workshop for supporting the State Government to achieve desired revenue generation. He added that Board of internal revenue  has put all hands on deck to fill in the missing gaps that are not incorporated in revenue generation for a better result.
Also, the Permanent Secretary in Ministry of Finance and budget, Mrs. Gyatam Bassi, stated that the workshop is a step forward  for the stakeholders to expand their internal revenue generation  for development of Adamawa State.
Consequently, a presentation was made by a resource person Mrs. Suzanne Myada,  on “ Internal Revenue Generation and Validation of Report”.
In an interview with some participants, Mr. Simon Edan, who is the former Auditor General North East National Association of Proprietors of Private Schools, said ‘ The workshop  has  broadened his horizon to understand that there is a department in revenue board for private sectors to forward their complains in regards to revenue collection.
Lastly, the Permanent Secretary in the Ministry of Livestock and Agriculture Dr. Abdulrahman Tukur, described the workshop as an eye opener because if all what have been taught will be put into practice in various Ministries, Department and Agencies,  it boost revenue generation in Adamawa State.
The workshop was fully interactive between participants and facilitators based on success stories, challenges and way forward.
The participants were drawn from Ministries, Departments and Agencies, Amalgamated Union of Keke NAPEP drivers,  Proprietors of Private Schools, Gamzaki traders Association, Adamawa Chambers Of Commerce And Industry.
09:26
Adamawa Daily Reports
News
Email ThisBlogThis!Share to TwitterShare to Facebook