Home » politics » POLITICS: 2021 National Convention of PDP has been Adjudged as Peaceful, Transparent, hitch free and the Best ever in Nigeria.

POLITICS: 2021 National Convention of PDP has been Adjudged as Peaceful, Transparent, hitch free and the Best ever in Nigeria.

Deputy Governor Chief Crowther Seth disclosed this shortly after casting his vote at the convention held at the eagles square Abuja.


Eagles square Abuja was filled to capacity Saturday as the people's Democratic party PDP delegates from the 36 States of the federation and the Federal Capital Territory thronged for the National Convention of the party to usher in new executive for different offices at the national level which was mainly based on consensus.

Speaking shortly after exercising his franchise Adamawa Deputy Governor, Chief Crowther Seth gave kudos to Governor Ahmadu Umaru Fintiri who doubles as the committee Chairman of the convention for demonstrating good leadership qualities by organizing the must successful and historic convention ever in the country.

He maintained that Adamawa 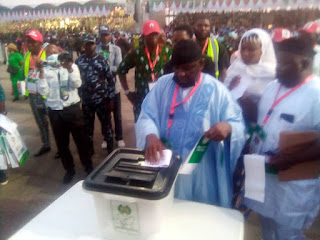 State Governor who got a niche for himself as a game changer is the true leader Nigerians have been yearning for, noting that he has continued to make history not only in the state politics, but the entire political landscape of Nigeria.

Chief Crowther also stressed that the hitch free and transparent conduct of the exercise is a clear signal that PDP remains the formidable and United party to beat come 2023.

The Deputy Governor noted that the party is on a rescue mission, adding that PDP is well repositioned to rescue Nigerians from the shackles of underdevelopment, hunger, poverty, unemployment, and above all insecurity, hence the call on party members and entire Nigerians to unite and say no to the current misrule.

Having said that the successful and credible conduct of 2021 national convention is the beginning of a new dawn in PDP and Nigeria at large, Chief Crowther Seth is optimistic that the convention will bring on board people of integrity who are capable of leading the party and Nigerians to greater heights.

The convention has brought together PDP caucus from the Local Government, State and the National levels.
13:42
Adamawa Daily Reports
politics
Email ThisBlogThis!Share to TwitterShare to Facebook