NEWS: USAID Holds Public Private Dialogue on IGR and Others 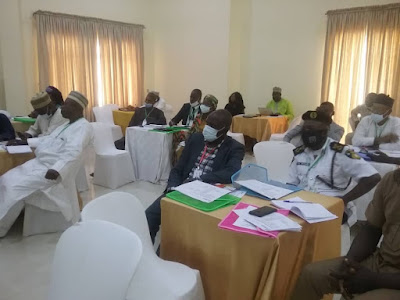 USAID State Accountability Transparency and Effectiveness Activity has organised a two days public private dialogue for stakeholders on how to strengthen the optimization of Internal Revenue Generation in Adamawa state. Held on the 26th -27th October, At Golden Alpine Hotel, Yola.

The two day dialogue is geared towards; To bring together stakeholders from Government, private sectors, trade unions, and community social organisations to discuss Internal Revenue Generation challenges, opportunities and make recommendations for Internal Revenue Generation  enhancement and expansion in the state, to fill in the linkages between Government Revenue and private sector among others.

The facilitators of the dialogue set up panels  headed by chairperson with five discussants each to deliberate on some major issues like; The need for improved and effective income generation  mechanism in the state, high level assessment of the Internal Generating Revenue potentialities  of Adamawa state, strategies for delivering an improved Internal Revenue Generation in the state, building public support mechanism for income generation  and improving citizens awareness on Government programmes and Internal Revenue streams in the state.

The discussants have identified some major challenges of Internal Revenue Generation  which includes; Multiple tax payment, lack of trust between Government and the Governed, lack of political will to do developmental projects, lack of effective facilities for effective collection  of tax, revenue, growing rate of private sectors, weak civic education and policy dialogue and linkages between tax and services from the Government, corruption by tax collectors and high level Government officials among others.

In an Interview with some participants who participated in the dialogue, Mal. Babagari Baraya, the interim Chairman of Good Governance Group, commended organisers of the dialogue for  the timely intervention, for bringing stakeholders to discuss together which has been missing  in Government,  he said  Government need to engage Community social organisations, private sectors, to identify tap and untapped linkages and profer solutions for a sustainable development in Adamawa State. Also, Government needs to empower tax collectors and train them on how to encourage tax payers comply with them to avoid enforcing them to pay their taxes.
Also, Hajiya Maryam Baba, Women leader Gamzaki traders association, said Government need to create an avenue with traders in Market to discuss some problems they are facing because they pay multiple taxes which needs to  be addressed.

Similarly, Barrister. Abubakar Saad, Director. Legal services in Adamawa state House of Assembly, said as a legislature they have an oversight function to ensure that all the Monies appropriated should be justified by Government,  Also, Government  needs to document her Ministries, Departments and Agencies in Revenue collection, identify various MDAs predicaments in revenue collection, pass a law and implement it to increase salaries of staff of internal revenue so as to be well motivated. He called on stakeholders to put what they have learned into practice in their various organisations.