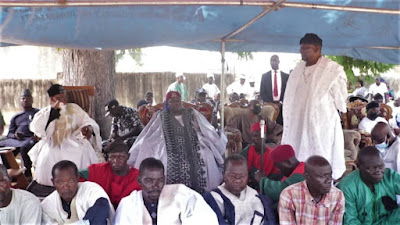 
The remains of Prince Tommy Alhamdu Teneke, the first son of Hama Batta Homun Alhamdu Gladstone Temeke has been laid to rest in his ancestral home Old- Demsa, in Demsa Local Government of Adamawa state.

Governor Ahmadu Umaru Fintiri at the funeral service held at LCCN Church Old-Demsa described his death as a great loss not only to the  immediate family, but the entire Batta land, Numan federation and the state at large.

Governor Ahmadu Umaru Fintiri said he deemed it necessary to pay his last respect to the deceased, a clear demonstration that in good or bad situation, his administration is with the Hama Batta Homun Alhamdu Gladstone Teneke and the entire people of Batta. 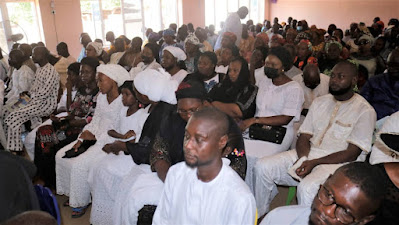 He reminded Christians that God gives and takes, hence the call on the bereaved family to be patient and take his demise as an act of God and has cautioned faithfuls against hatred, for no one knows the day nor the hour of his death.

While praying God to comfort the family and the remains of prince Tommy Alhamdu Teneke to rest in peace, he tasked the faithfuls to desist from denominational and any form of differences, instead work in unity, reminding them that the body of christ is one.

In a message titled "When death calls," Reverend Gadiel Amana reminded Christians that every mortal must test death no matter one’s position and age. He urged them not to be discouraged as death is the beginning of a new life for any believer.

The Clergyman therefore, admonished the living to live a holy and purposeful life for the divine will of God while still on earth.

Late prince Tommy Alhamdu Teneke 49, was born to the family of his royal majesty, the 55th Hama Batta Homun Alhamdu Gladstone Teneke on 25th September, 1972 in Demsa. He joined his ancestors on sunday 31 October, 2021 after a brief illness and is survived by a wife and three children.
13:23
Adamawa Daily Reports
News
Email ThisBlogThis!Share to TwitterShare to Facebook