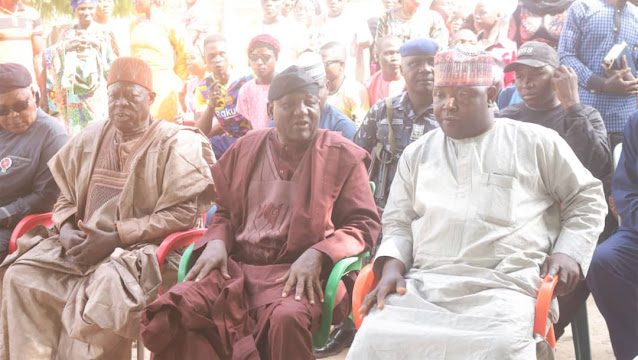 
He was speaking while on a thank you visit to Bang and Bagyashi communities of Lamurde Local Government Area of Adamawa state.


The visit by the Deputy Governor, Chief Crowther Seth and his entourage to Bang and Bagyashi communities was in appreciation of their loyalty and support to the fresh air government, reassuring of the present administration's readiness to deliver on its people oriented policies and programmes.He said the Fintiri led administration will continue to defend the principles of democracy for the realization of a new Adamawa.

Having thanked the communities for their support and contributions for the success of the present administration, the Deputy Governor how ever, advised Chobo ethnic group not to give chance for any divisive tendencies, be it political or otherwise, instead unite and be brothers keeper.

The Honourable Member representing  Lamurde in the State Assembly, Mbauna Miyandasa among other stakeholders equally lauded the spirit of descipline, unity and support demonstrated by the people of Chobo, urging them to sustain the tempo.

They reminded them that a community cannot progress or develop without peace and unity, hence the need for them to always speak with one voice.

Some community elders to include the Village head of Wadepwa Brown Masauki and that of Bagyashi Eban Dayiam among others concurred that unity is the key to greatness, reassuring their unwavering support and loyalty to the fresh air government.

They Said developmental strides of the Fintiri's led government is glaring in reality, hence their resolve to put their confidence and trust in the present administration to salvage the state from the shackles of underdevelopment.
11:52
Adamawa Daily Reports
News
Email ThisBlogThis!Share to TwitterShare to Facebook