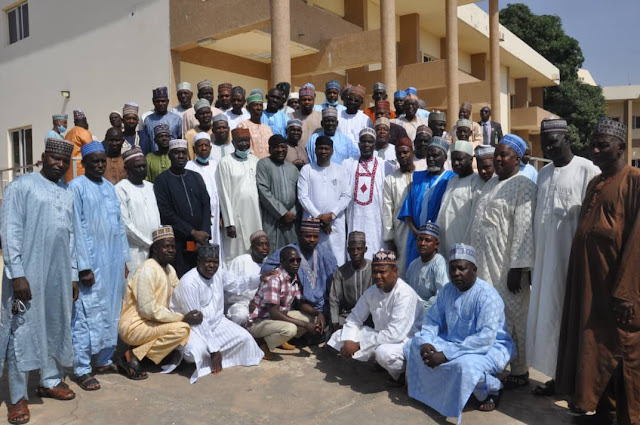 Governor Ahmadu Umaru Fintiri has met with the businessmen in the state capital and assured to consider their request, to open an alternative gate at the Jimeta Modern Market, establish management of the market and review the rent of the shops.

Responding to the request of the businessmen, Governor Fintiri said that since inception into office, his administration has introduced an open door policy; allowing all and sundry to give advice on how to move the state to the position it deserves.

Governor Fintiri explained that during the campaign period he had made it clear that when he comes on board, he will demolished the illegal shops constructed at perimeter fence of Gate 1 of the Jimeta Modern Market. He said despite the early warning, politicians and some businessmen went ahead to sale and buy spaces at the perimeter fence to build their shops respectively. He maintained that stopping the construction work is necessary for security reason and to maintain the standard of the market.

Governor Fintiri stressed that all his policies are not targeted on any individual or group of people but for the best interest of the people of Adamawa.

While explaining the reason for the closure of the Gate 3 of the Jimeta Modern Market, Governor Fintiri said that they received advice from experts that if the gate remains opened after completion of the flyover at the Capital Junction, it will be a tragedy; frequent accident may not be averted and lives are likely to be lost.
The Governor said that after weighing the advantages and disadvantages of closing the gate, the closing of the gate happened to be the best.

Governor Fintiri urged the businessmen to desist from working with rumours, but seek first hand information from the appropriate authority while admonishing them to suggests where an alternative gate will be opened at the Jimeta Modern Market that will ease movement of people and goods into the market as well as come with modalities on how the Government should subsidize the shops, for consideration. He stated that his administration has provided a conductive business atmosphere for businesses to flourish in the state. Maintaining that Adamawa being a civil servants state, he ensure that salaries are paid promptly on or before 25th of every month. This he noted has help businesses in the state flourish.

Governor Fintiri assured that he will soon established the management of the Jimeta Modern Market so as to bring to an end the preventable agitations in the market.

He enjoined the businessmen to keep paying the rent of the shops to help Government generate revenue that will help in execution of projects in the state.

Earlier speaking, the Chairman of the Jimeta Businessmen, Alh. Musa Garba said they were in Government House Yola to pay solidarity visit on Governor Ahmadu Umaru Fintiri with all the renowned businessmen from different political parties.
He said that he is optimistic that Governor Fintiri will deliver all his campaign promises before the end of his tenure in office having executed laudable projects that turned Adamawa to a mega city.

Alh. Garba enjoined the businessmen to disist from politics of hatred and bitterness which he said will be a disadvantage for the growth and development of the state.
Contributing, member of the business community, Hon. Bashir Abdullahi lauded Governor Ahmadu Umaru Fintiri for subsidizing their shops by 50% when he was acting Governor of the state in 2014.

He appealed to the Governor to consider the plight of the businessmen who buy the spaces at the perimeter fence of the market and established the management of the Jimeta Modern Market.

On his part, Alh. Musa Tea disclosed that apart from the the shops that was allotted to Rana tafito and Gamzaki Traders Associations all the shops in the market was purchased by the businessmen.