BESDA: Gov Fintiri Launches Enrolment of Out of School Children By Barnabas Augustine
10/2/2022
Governor Ahmadu Umaru Fintiri has launched the year 2022 enrollment of out of school children into Better Education Service Delivery for All (BESDA), a non formal learning centres in 21 Local Government Areas of Adamawa. The event in Mayo Belwa was for the first batch of the targeted over one hundred thousand out of school children that will be enrolled into non formal education in 2022.

Launching the programme at Mayo Belwa Primary School in Mayo Belwa LGA, Governor Fintiri said  BESDA intervention by the Federal Government falls inline with the resolve of his administration to fully implement the Free and Compulsory Universal Basic Education Programme.

Governor Fintiri revealed that through the BESDA out of school children were reduced in Adamawa.

"Through the BESDA Program alone, Adamawa State was able to reduce its number of out-of-school children (OOSC) by 51,205 from 12 LGAs. Much more were enrolled into our conventional school by the State in collaboration with other development partners" Governor Fintiri said.

The Governor disclosed that this year, his administration has planned to enroll 102,400 out-of-school children from the 21 LGAs. Adding that the traditional institutions will be involved in the programme of enrollment of out of school children; because of the believe his Government has that Royal Fathers will play a vital roles aiding the success of the programme while assuring to partner with the Royal Fathers in all developmental programmes of his administration. 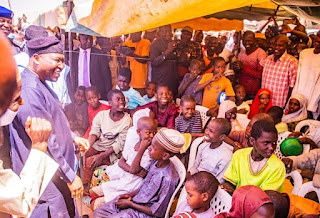 Earlier, the BESDA State Programme Coordinator, Dr Mohammed Degereji explained that BESDA is an intervention grand from the Federal Government for states to access. He said is the responsibility of the state to organize how it want the programme to be executed.

He said that the objective of BESDA is to reduce the number of out of school children, improve literacy at the early grade level of primary and strengthening accountability and transparency for good results. 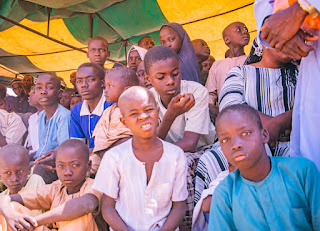 According to BESDA State Coordinator, under result area two of the programme, Adamawa has introduced two intensive literacy programme: one is in Hausa language called "Rana" meaning reading and  learning literacy activities in primary one; the second is jolly phonics in English language which about 1,784 out of the over 1,900 schools in the state have benefitted from the programme.

He disclosed that under area three result, BESDA has trained education managers in Adamawa on ICT skills. He stated that BESDA came to Adamawa in 2017 but could not operate untill Governor Ahmadu Umaru Fintiri came on board in 2019 and achieved the numerated achievements.

In her goodwill message, the Commissioner Ministry of Education and Human Capital Development, Hon. Wulbina Jackson called on women to stop desist from engaging their children with street trading but send them to school to make their future brighter.

On his part, the Executive Chairman Adamawa State Universal Basic Education Board, Dr Salihu Ateequ described the rate of out of school children as unfortunate; assured unflinching support of his to the success of the BESDA programme.

Also speaking, the Lamido Adamawa, Dr Barkindo Aliyu Mustapha represented by the Galadima Adamawa, Alh. Mustapha Aminu said that the traditional institution in the state is working round the clock, ensuring that no child remains on the street and lauded Governor Fintiri for recording remarkable achievements in education sector.