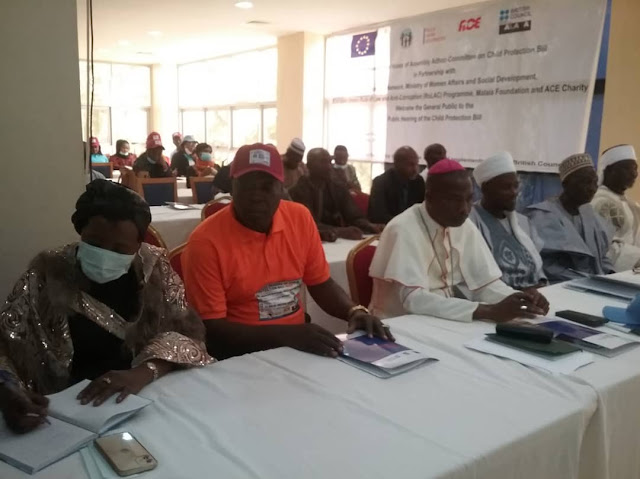 Adamawa State House of Assembly  comittee on  Child Protection Bill in partnership with Child Protection  Network, Ministry of Women Affairs and Social Development, E-U Rule of law and Anti- corruption  programme, Malala foundation and ACE charity, has organised a  public hearing on passage of child protection bill in to second reading in the state House of assembly. Held at AUN Hotel, Yola.

Declaring the programme open by  the Speaker, Adamawa State House of Assembly, Honourable. Aminu  Iya Abbas, said “ the delay in passing the child right bill in Adamawa State, is because  the House will not pass any bill that is contrary  to religious, traditional or cultural  beliefs of the citizens. Because some contents of the bill are not in line with our cultural and religious beliefs, therefore, members of the legislature consulted religious and traditional leaders and deliberate on what should be left out from the content of the child rights act that suits religious, traditional and cultural beliefs of people of Adamawa state before passing the bill into law.

Also, the chairman ADHOC committee on child protection, Hon. Hamman Tukur, in his remarks, stated that the bill will  be translated into local language for easy understanding of people before passing in to law. He called on stakeholders to look into the bill critically and address some things that are against their religious, cultural beliefs.

Furthermore, the representative of Attorney general, Barrister. Abdul rahman, congratulates people of Adamawa state for addressing hitches that are hindering passage of the bill in to law.

Consequently, the coordinator Rule of law and anti-corruption, Barrister. Hafsat Abdullahi, described the programme as a remarkable one because, 13 years ago, stakeholders are not  carried along to have an insight in what the content of the bill is all about but, now stakeholders are being sensitized on the need to support passage of the bill through advocacy visits, review and validation of the bill. She maintained that any bill is subject to amendment because it is a continuous process.

Climax of the public hearing was technical session where by organisations that submitted their memorandum made observations and recommendations  that are fully in support of passage of the bill.

The  observations raised by Muslim council is on Girl marriage, they opined that any Girl that attained the age of puberty is entitled to get married which is contrary to what is embedded in the content of the child right act that stipulated until a Girl attains 18 years before she get married. The Muslim council maintained that they look into the bill in alignment with national Islamic law.

Moreover, Global youth and social awareness foundation, reiterated on the need for stiffer punishment on parents of survivor of rape, because the parents mostly withdraw cases of rape in a court of law.

Other organisations that  are in support of  passage of the bill are: CAN, Child Protection Network, National youth council of Nigeria, UNICEF, NURTW, Universal Health and Economic Empowerment Foundation, National Youth on People living with HIV and AIDS, JABU Development Foundation, FIDA, NBA, and Ministry of women affairs and social development.

The above organisations commended the Rule of law and Anti corruption and all stakeholders involved for their giant stride in ensuring  the child rights bill passed to second reading in state House of assembly.