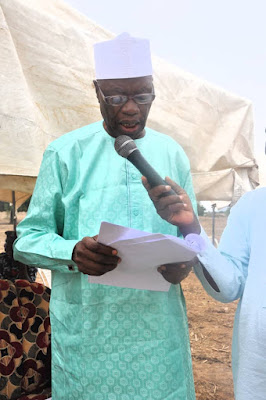 The Sons and Daughters of Bazza Community have launched Bazza Community College (BCC) to provide secondary school education to their children and neighbouring communities.

The Convener of the launching of Bazza Community College, the former Deputy Governor in the defunct Gongola State, His Excellency, Barr. David Barau noted that education is sense, sensible, security, service, salvation and a guarantee to unity. He said the college when fully operated will unite all and sundry of Bazza and bring development in the community.

He explained that the launching of the BCC is more crucial, serious, universal and involvement of sons and daughters of the community. Adding that consultation started in June 2021, leading to formation of 14 different comittees comprising of about 135 Bazza Sons and Daughters who are prominent in their various field of endeavors, status and standings.

According to His Excellency, Barr. Barau, the intention of the organizers was to establish a world class secondary school having the standard of education in rural areas will not guarantee passing Mathematics, English and Computer studies which is necessary for passing JAMB examinations.

He said that Bazza has the population of 38,886 by the projection of 2006 census with 31 primary schools that has a  population of about ten thousand pupils who will be a feeder for the BCC. Stressing that the concept for the establishment of the BCC is to have a solution to the decay of the standard of education of the children while explaining that the college will be owned by the community; it shall be a community service by all sons and Daughters of Bazza and it shall be run in perpetuity starting with 3 class rooms.

He disclosed that the college which will be established at Dilichim in Bazza as a community service, when it fully come to operation is expected to accomodate about one thousand students.

His Excellency Barr. David Barau called on Governor Ahmadu Umaru Fintiri to continue with his good education policy as the Bazza Community is complementing his effort on education by establishing the BCC. And, assured the Governor of the community support for his administration to succeed.

The Guest Speaker at the event, Prof. Mohammed Isa Bazza who titled his paper, "Consequences and Implications of Insecurity on Education in Bazza Community" said that the activities of the insurgents in North East have caused a lot of effect on education, leading to destruction of schools and abduction of students. Noting that schools in Adamawa was less hits, but lacks basic facilities.

He explained that the socio-economy, political, growth and development of a community depends on the literacy level of its citizenry. Urging the organizers of the establishment of BCC to consider factors of good plan, organizing, directing and controlling. Saying when these factors are carefully diagnosed, it will help the BCC stand on its foot.

Prof. Bazza called on the Federal Government to impose state of emergency on the security of education while the Adamawa State Government should consider same and the local government down to the wards should compliment the effort when it has been declared.

During the session of the launching, over three million naira was realized with the convener, His Excellency Barr. David Barau donated one million naira, Alh. Haliru Ali made pledge of one million naira and Alh. Zubairu Adamu Bazza promised to drill a borehole at the school.

Other donations made are: Hon. Abel Behora promised to construct a block of class room, Dambala Association Abuja pledge N500,000, prof. Mohammed Isa Bazza pledged fifty thousand naira for the next five years and to deliver annual concelling lecture to students when the school took off and the chairman Michika LG Hon. Amos Kwaji Drambi and Councillors in Bazza donated N150,000. There were also donations from groups and individuals.

In his vote of thanks the District Head of Bazza, Alh. S.L. Basshir represented by the Village Head of Ldaba, Sir William Gurai thanked the organizers of the BCC for launching a college for the benefit of the community and all those who support the event while assuring his maximum support for the actualization of the College.