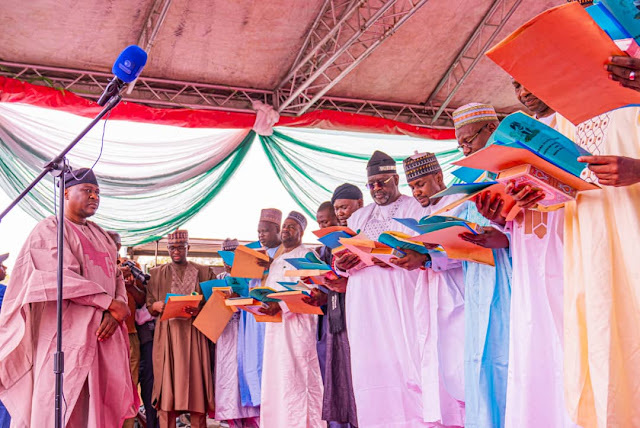 By Barnabas Augustine
11/4/2022
Adamawa State Governor, Ahmadu Umaru Fintiri has declared his intention to contest for the seat of the state governor in the 2023 general election.
Governor Fintiri made the declaration, Monday at the swearing in ceremony of the 21 LGA Chairmen of Adamawa State at the Mahmud Ribadu Square in the state capital, Yola.
The Governor disclosed that Nomination Form for Adamawa Gubernatorial race of the People's Democratic Party has been picked for him.
"Because we have done so much and there is more to be done to better the lot of our people and our dear State; because we have built a trusting relationship with the electorates, majority of whom are the masses where our support (both in votes and prayers) is derived; because our party needs to continue on the path of victory; after a very wide consultation within our great Party and outside it; within the State and outside it; with my family, friends, associates and leaders, I wish to formally inform you that I have accepted to offer myself yet again, to seek for the endorsement of our Great Party, the PDP, to carry its flag in the 2023 Governorship race of Adamawa State", Governor Fintiri declared.
"I believe you can trust me again as you have done before. There is indeed nothing about me that either you or the entire citizens of Adamawa State do not know.
"And there is nothing on the shelf of your developmental needs that I do not know. I have started the crusade for reinventing a new Adamawa where no one is left behind and nothing is left untouched.
"We have done so much in physical infrastructure and moving forward, Stomach infrastructure will take precedence.
"I seek for your support to continue the good work we have started in the State".
Governor Ahmadu Umaru Fintiri congratulated the 21 elected Local Government Area Chairmen and the 226 Councillors for their victory at the polls while commending the State Independent Electoral Commission for conducting free and credible Local Government election of the April 9th.
Governor Fintiri stated that the PDP was massively voted because the electorates believed in the policies and programmes of his administration. He charged the elected Chairmen to sit up, work for the masses according to the oath they have taken.
Governor Ahmadu Umaru Fintiri urged Adamawa citizens to vote for the PDP in the 2023 general elections  while canvasing support for the former Vice President, Atiku Abubakar in his ambition to be the candidate of the PDP in the 2023 general election. According to Governor Fintiri, the PDP is the only party that will take Nigeria to its expected position.
Speaking on behalf of the Chairmen, the Executive Chairman, Mubi North LGA, Suleiman Sudi Yahya thanked Governor Ahmadu Umaru Fintiri for providing enabling environment free and credible election in the State.
He assured that the newly elected Chairmen will not disappoint the state in the course of discharging their duties and will work tirelessly for the people of their respective LGAs.
Also speaking, the Chairman PDP Adamawa State, Barr. Tahir Shehu said that the PDP has won the election in 21 LGAs of the State because the Governor Ahmadu Umaru Fintiri government has put in place developmental projects across the state which made the electorates have no party in mind than the ruling party in the state.
Barr. Shehu who received decampees from APC to PDP stressed that the PDP has silence the opposition in the State because of the Programmes and policies of Governor Fintiri led administration, targeted to take Adamawa State to the greater height.
Responding on behalf of the decampees, the former Minister of Health, Dr Idi Hong described Governor Ahmadu Umaru Fintiri as man of his word which attracted him and his supporters to the PDP; in addition to the developmental projects initiated and executed by the Governor.
He assured to work for the PDP ahead of the 2023 general election.
In their separate goodwill messages Hon Adamu Kamale from Northern Zone, Dr Mustapha Saidu from the Central and Sen. Binos Yaroe of the Southern Zone enjoined the electorates to vote for all PDP candidates in the 2023 election.
Those sworn in includes:
Demsa Wenekam Wesley Fwa; Toungo: Suleiman Ahmed Gangkuba; Guyuk: Solomon Abafras; Jada: Mohammed Salihu So'o; Shelleng: Abubakar Musa Abba; Numan: Christopher Z. Sofore; Mubi North: Suleiman Yahya Sudi and  Mayo-Belwa: Muhammed Usman Buji.
Others are Lamurde Bulus Daniel; Ganye: Jibrin Ali Gangiari; Song: Gidado Abdulsalam; Hong: Usman Inusa Wa'aganda; Girei: Judah Amisah; Gombi: Abdurahman Dauda Shanga and Fufore: Usman Hammantukur Daware.
Completing the list are Michika: Amos K. Drambi; Maiha: Abubakar Habu Mustafa; Madagali: Andrawus N. Gadzma; Yola South: Hamidu Mohammed; Yola North: Nasiru Hammantukur and Mubi South: Hamidu Jingi Dirbishi.
08:03
Adamawa Daily Reports
News
Email ThisBlogThis!Share to TwitterShare to Facebook