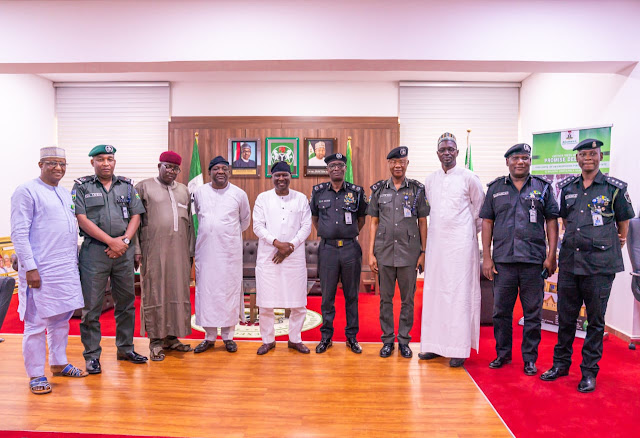 Governor Ahmadu Umaru Fintiri has received the new Commissioner of Police, CP Sikiru Kayode Akande deployed to Adamawa State and charged him to Consolidate on the gains of his predecessors in fighting crimes in the state. Governor Fintiri who described the new CP as a gallant and educated with rich profile, enjoined CP Akande to use the knowledge he acquired with the Police, deploy it to make Adamawa safe.

Governor Fintiri disclosed that the security in Adamawa has improved because of the enomous resources his administration deployed to fight crimes and criminalities and give maximum support to the police as well as open his doors for them to discuss issue of maintaining peace in the state.

While lauding past commissioners of Police posted to Adamawa for tackling crimes, Governor Fintiri charged CP Akande not to endulged in what is not his responsibility but work for the development of the nation.

Governor Fintiri noted that kidnapping has resurface in some parts of the state, express optimism that CP Akinde with his vast experience will work with other sister organizations to halt the activities of the criminals. He assured to give the new CP maximum cooperation to succeed in his new place of assignment, Adamawa State.

Earlier speaking, CP Sikiru Kayode Akande disclosed that Adamawa State was not new to him having he served as a youth copper in the defunct Gongola State.
He said that he will deploy maximum resources and in few weeks perpetrators of  crimes will be apprehended to serve as a deterrence to others.

CP Akande assured to serve the state accordingly and make Adamawa to be the safest in the north east region.