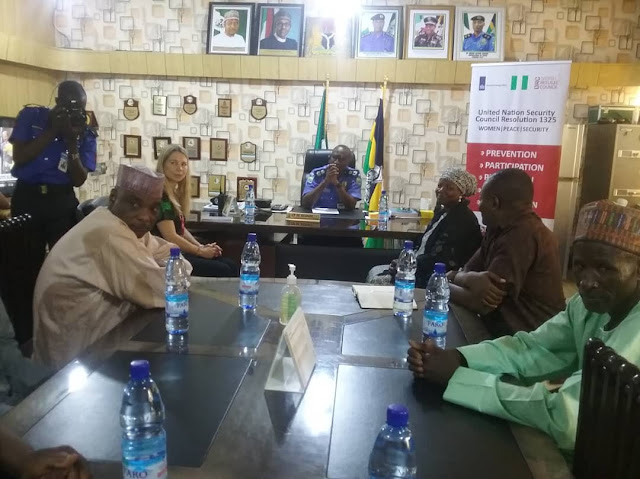 The Ministry of Women fAfairs and Social Development in collaboration with Danish Refugee Council, has paid an advocacy visit to  stakeholders in Adamawa state seeking for their support to approve the reviewed second edition of document on Women  Peace and Security.

The WomenPpeace and Security is a United Nations Security Council Resolution  (UNHCR) 1325,  which advocates  for women engagement in peace and security with the following pillars; Crisis management, post conflict reconstruction and recovery, participation and representation of women in peace and security, protection and prosecution, prevention of violence and disaster reoccurrence and partnerships -synergy, coordination and relationship management.

The reviewed edition of  the  second action plan consists of the following pillars; participation and representation of women, protection and prosecution, prevention of violent extremism and disaster reoccurrence, sensitization  and creation of awareness on early warning response,  crisis management, post conflict reconstruction and early recovery. 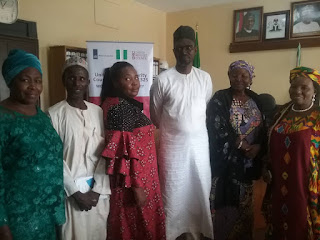 The Team Leader of the advocacy visit is the Permanent Secretary Ministry of Women Affairs and Social evelopment,  Mrs. Saso Benson Ali,  who paid a visit to secretary to state Government Malam Bashir Ahmed in his office, she intimate him about content of the   document and present it to him for Government to go through and sign. The permanent secretary appealed to Government to look into the plight of women as partners In  progress.

The Secretary to the State Government, Malam Bashir Ahmed,  on behalf of Adamawa state Government congratulates the team for the giant stride, he assured them Governments support in promoting and protecting the right of women.
Consequently, the team further  paid an advocacy visit to Muslim  Council to intimate them about the latest development and solicited for their support so as to make the document workable.

The Chairman Muslim council Malam Gambo Jika, commended the efforts of Ministry of Women Affairs and Aocial Development and Donor Agencies  for touching the lives of women and children. He made it known to them that in Islam , a woman has no limitation in acquiring education, and other social economic aspect of human endeavour. Malam Jika, called on Ministry to enlighten women on the need to live in peace with one another.

In another development, the peace building Global Adviser, Danish refugee council, Mrs. Line Brylle, joined the team and paid another advocacy visit to the Chairman, Atate Planing Commission, Mrs. Mary Paninga, at her office, where the Peace Ambassador said she came in to Nigeria  to access the achievements of Women Peace  and Security. The Chairperson said, women are carried along in peace building and decision making in the state.

In the same vain, the team also, paid  a visit to Commissioner of Police at his office, where they inform him about the new edition of the document on women peace and security. The permanent secretary pleaded with the police command to ensure conviction and persecution of perpetrators of gender based violence.

Responding to the team, the Adamawa State Police Commissioner, Mr. Sikiru Kayode Akande, lauded efforts of   the  team for engaging women in peace security. Mr. Kayode, said he is trying to meet commissioner of justice  to discuss on the  need for  speedy dispensation of justice to victims of violence. He announced that inspector general of police has initiated a rescuing application known as RESCUE ME, it is an Application  for  reporting violence by people  for police to avail themselves at the scene to rescue the and manage the situation. He reiterate that the police will not relent in ensuring that the lives and properties of people are protected.