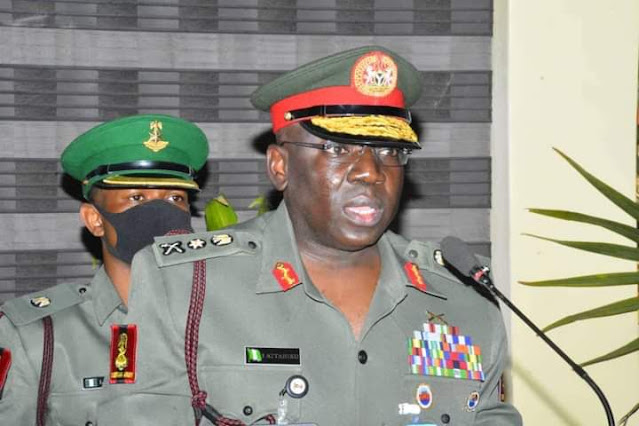 "Our Nation owes a debt to its Fallen Heroes that we can never fully pay" says the former US President, Barack Obama. I find this quote to be intriguing. Nigeria as a country is not an exception because it's owes it's Fallen Heroes huge debts of gratitude that can never be fully paid. The late Lieutenant General Ibrahim Attahiru, a former Army Chief of Staff and 10 other officers that lost their lives in a plane crash on the 21st May, 2021 in the line of duty can never be paid or compensated because they paid the supreme price while serving our dear Nation. However, the ultimate and exact thing to do as a people and as a country is to honour and respect the very cause which the Heroes have fallen for – which to protect and serve our nation, Nigeria.

The late COAS, Lt. General Ibrahim Attahiru hailed from Northern Kaduna in Kaduna State. He was born on the 10th of August 1966 and had his primary school education at Kaduna in 1978. He was a graduate of the Nigeria Defence Academy NDA, a graduate of Armed Forces Command and Staff College and a graduate of Nigeria Army School Infantry. Lt. Attahiru had his Officer Cadet Training in 1984 and was commissioned as a Second Lieutenant in 1986 as an Infantry Officer. The trained Military Officer also held two Master’s Degree ; One in "Strategic Management and Policy Studies" from the Nigeria Defence Academy NDA and one in “Science in Human Resources Management and Development from Salford University in the United Kingdom UK". He also had a Diploma in International Studies from the University of Nairobi.

Interestingly a close friend and an associate of his (COAS) in the person of Mr. Didi Ndiomu feels that a fallen hero like the late COAS should be immortalised. Mr Ndiomu who is the Chairman board of Trustees of the General Ibrahim Attahiru Foundation, had on Monday 16th of May 2022 told THISDAYLIVE why the late Chief of Army Staff Lt. General Ibrahim Attahiru’s name should be immortalised. He said that the late COAS was an amazing guy and that his commitment to Nigeria was phenomenal. “He was hoping that he’d be able to take the whole brigades for training for as long as six months..." says Ndiomu. "Trust me, I knew the things that he wanted to do. There’s something he always said about the triumvirate for peace, that it had to be a covenant between the government, army and the people who all have to speak with one voice" he added. I believe that a lot of Nigerians might have considered immortalising his name for different reasons or a similar cause.

Furthermore, the General Ibrahim Attahiru Foundation, according to him will focus on leadership training, education, mental health and welfare of less privileged groups which are in line with the dreams and aspirations of the Late General. Mr Ndiomu revealed that the Foundation will be formally launched on Saturday, May 21, in Abuja.

Lt General Attahiru was appointed as the Chief of Army Staff by the President of the Republic of Nigeria, His Excellency, President Mohammadu Buhari, on 26th January 2021. This was supposed to be the peak of his Military Career but death snatch him away from his family, his career and the motherland. He left at a time when his family needed him the most. He left when the Nigerian Army and the Nigerian Military needed him the most. He left when the people of Nigeria were yearning for his professional services. He died while on active duty. One can never do away with the other 10 and many other fallen heroes while talking about another. A good number of our heroes have died on the battle field, some in captivity, some are nowhere to be found but, whatever the case might be " there is nothing nobler than risking your life for your country " - Nick Lapson (an American author).
The Nigerian Army under General I. Attahiru was able to record a considerable success as several terrorists were eliminated as the results of the Military's series of attacks at the Sambisa area and the Boko Haram’s hideouts. Under him, "Operation Tura Takai Bango", the Military’s first major operation in the year 2021 to degrade threats in the North-East emerged and was commendable. Boko Haram commanders, Abul-Bas, Ibn Habib, Ali Bor and Maleum Modu, among others fell to firepower. The Late COAS has maintained and sustained a cordial relationship between the air and ground forces, and credited successes to the partnership. He renamed the Operation in the North-East from "Operation Lafiya Dole" (OPLD) to "Operation Hadin Kai" (OPHK). The renaming was in line with the COAS vision of having an Army repositioned to professionally defeat all adversaries. Source: Daily Post Nigeria.

As we remember the late Lt General Attahiru Ibrahim, and the other 10 officers and men that passed away this Saturday, it is imperative to mention that, their sacrifices and memories would not go in vain, as the highlights of the One Year Memorial in honour of the late COAS include: the Unveiling of a Biography on the Life and Times of Lt General Attahiru; a tribute titled ‘To All Who Give Their All For All’ by the renowned Nobel Laureate Professor Wole Soyinka; as well as the unveiling and screening of a Documentary on the life and times Lt General Attahiru. Thus, the late Lt General Attahiru may have passed away but his memory will continue to live on, through the programs of the Foundation that would continually perpetuate his leadership qualities,  ideals, generosity, and sacrifice for Nigerians and the motherland.