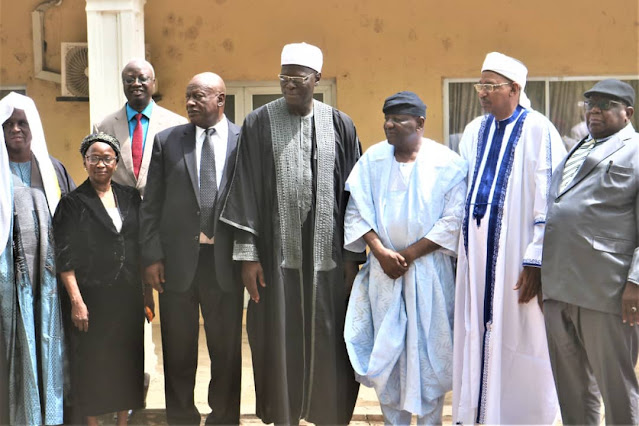 The Deputy Governor,  Chief Crowther Seth has on behalf of the Governor of the State presided over the swearing in of the new Acting grand Khadi of Sharia Court of Appeal, Yola with a charge on him to work within the confines of law thereby, defending the constitution of the federal republic of Nigeria.  The inauguration ceremony took place at the Deputy Governor's office recently .


Governor Ahmadu Umaru Fintiri, congratulated the outgoing Grand khadi Usman Aliyu Girei for the successes recorded  while in office noting that his efforts will go down the history of the sharia court of appeal and the state as a whole

While reiterating that Adamawa state government is appreciative of his contributions to the growth and development of the judiciary, governor Fintiri, wished him good health, God's guidance and protection in his future endeavor.

The Governor also congratulated the new acting grand Khadi Ibrahim Wakili Sudi, praying for God's protection, wisdom and knowledge as he carry out his functions in the judiciary.

The people's Governor tasked him to establish good working relationship with his staff and carry out his duty diligently without fear or favour.

He assured of his administration's readiness to continue to do everything possible to strengthen the judicial and other arms of government for desired result.

In his acceptance speech the New Acting grand khadi, Ibrahim Wakili Sudi appreciated the Governor for finding him worthy of the position, assuring of his full commitment to deliver. He is expected to work on acting capacity for a period of three months.

The oath of office was administered by the Adamawa state chief judge, Justice Nathan Musa.