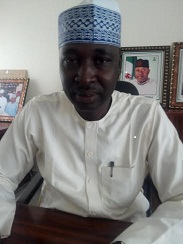 The Hon. Member commended the efforts made by the Governor as being one of the few among his peers in the country to implement the bail out loan as directed by President Buhari's administration.

Hon. Burguma dis-abused the minds of those who are thinking that the loan will enslaving the state, saying that it's a soft loan with twenty years maturity of payment and the interest rate is just nine percent.

"We will have been on the disadvantaged side if our Governor did not access bail out provide by the Federal government to rescue state with civil servants salaries,leave grands and pension problems."
"The loan is to be paid in twenty year with nine percent interest rate which OK and cannot enslave the state in whatever way". Mamman said
He further said that, lawmakers in the state are to see and checkmate any form of irregularities in the state not minding whose goat is goated from wherever angle is being done.
01:21
Adamawa Daily Reports
Email ThisBlogThis!Share to TwitterShare to Facebook