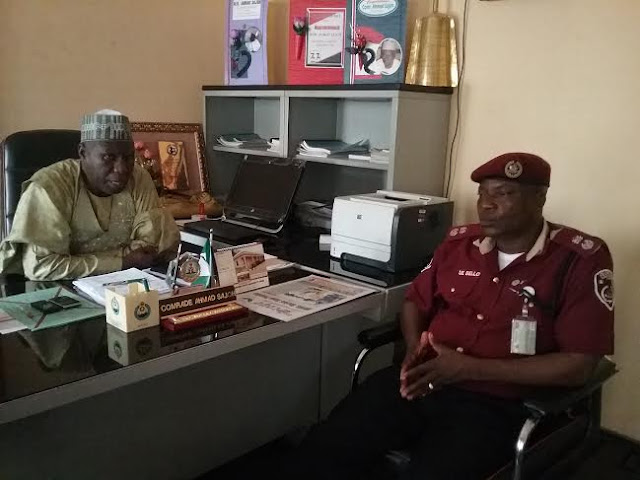 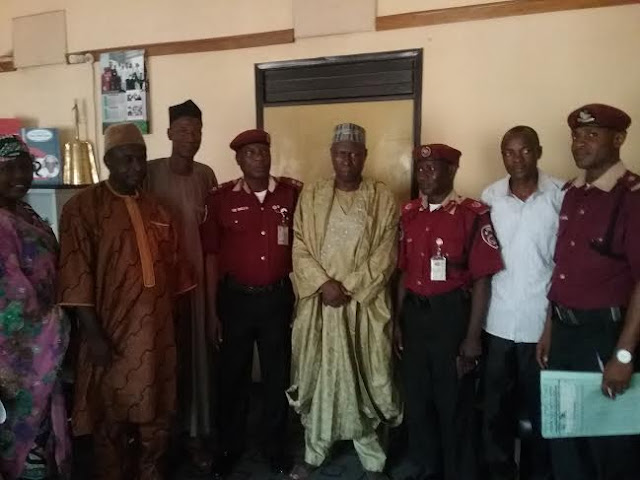 The Hon Commissioner of Information Assured the New Sector Command of his Partnership.
The Honourable Commissioner for information Comrade Ahmed Sajoh has assured the new Sector Commander RS3.1 Adamawa sector command EL- Faruk U. Bello of his ministry's determination to partner with the command in all its activities particularly as it relates to the media.

He said that the media has a corporate social responsibility towards the command and should therefore be involved in all its activities and programmes.

The commissioner informed the commandant that the ministry has an Internet blog adamawadailyreports@gmail.com where daily activities of the state and beyond are immediately showcased .He maintained that the ministry has plans to produce posters on safety tips  for distribution to the public  in addition to presentation  of lecture  series on topical issues in all the wards in the state ,assuring the commandant that road safety tips would be incorporated  with the campaign .

Comrade Sajoh described the Federal Road Safety Corps as one organisation that has distinguished itself in the discharge of its responsibilities and admonished them to maintain standards. He appealed to the commission to recruit media personel for effective synergy between the two organisations. .
The Hon. Commissioner gave the assurance when the new sector Co- mmander paid him a courtesy visit in his office. The Sector Commander said he was in the ministry to congratulate the Honourable Commissioner whom he described as a square peg in a square hole and to solicit for partnership between the two organisations. He said that public perception towards safety tips requires adequate sensitization and mobilisation. The role of media in this respect is therefore very crucial.

The sector  commander  enumerated  some  of the  common practice  by our drivers  which constitute great  dangers to both motorist and  commuters. He described  over loading,overspeeding driving  with worn out tyres,non adherence  to speed limits,driving  without  licence, driving  by under  aged children  are some  of  the  challenges  which  the command with the help of the  media  can  checkmate  through  adequate  publicity  on dangers associated  with  these  breaches.

The corps commander Bello revealed that the new  speed  limit  device  is on the way and that the command  will  not  relent  in its enforcement. He stressed  that  motorists  should  ensure the  road  worthiness  of their  vehicles and  adhere Strictly to speed limits during this EMBER period warning that defaulters would be prosecuted.

The sector   commander  appreciated the general   managers of  the  state  media Houses  and  the  N T A for the support they have been rendering the command . Finally, the commander presented  some safety tips to the Hon. Commissioner.
09:43
Adamawa Daily Reports
News
Email ThisBlogThis!Share to TwitterShare to Facebook