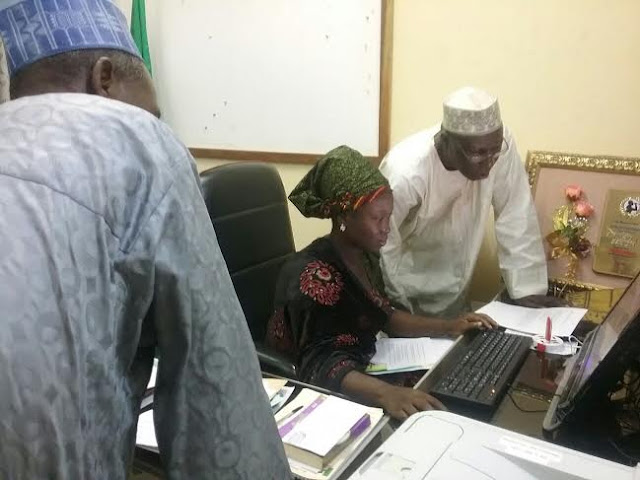 The worth of a true leader can be measured by the loyalty of his followers  who they consider a model, a partner in progress and a set spacer.
Above all followers submit their loyalty to their superior Men because of their trust in him, believing in his ideology in helping and support the feeble ones.
On recent time Adamawa state have discovered a golden fish in the deepest part of the ocean during the last days of Admiral Mustala Nyako  as Governor of the state.
The Man searched find was an erudite speaker and writer, an intelligent public relation officer, an articulated public analyst and a superb online journalist that has thousands of followers because of his fact base views.
The above description is in reference to Comrade Ahmad Sajoh the present commissioner  for information in Adamawa State whose appointment was purely base to wear a shoe that probably no one will wear in the state after much tussle of power supremacy that was not given much interest to be or not to be to him.
On final ground on his swearing in that was term " Sajoh the only man  finally stood up to be sworn in as commissioner" told the people of the state is out to work for the state, to contribute his passionate quarter to the overall development of the state and as such he cannot be a sychopant political office holder.
On his assumption into office and in the spirit of hard work he he reawaken the dwindling and slumbering attitude of some staff toward work in the ministry. He drawn every one close to him in order to refurbished and give them new orientation to work .
To some people they believe there is much gap between commissioners and other staff, but to Ahmad Sajoh is a personality that is known to have a  relationship of a "Servant leader in humility".
Some few weeks ago he set the precedence which other leaders in the state and country must  emulate, it the first of it kind in the state.
Since the inception of the Ministry of Information in Adamawa state there has not been be a time that a formal training, workshop or seminar was organised to match the twenty first century time that known to be a "jet time" that is fast moving with the trends of the century technology.
Out of his tied schedule the honorable  commissioner still create time to refresh his staff memory to manage information, he always train some of the information officer in the state personally so that they can get endowed  in their field of operation and  also move in changing  time.
According to Sajoh the world has since become a global village is characterise to be called "information age" there is a very fast need all the officers of the ministry to be trained to be know much of Online journalism which he bore the burden of given them perfect workshop with him in attendance.
The honorably commissioner  is further making  sure they have the requisite  knowledge  of the computerized age. It is really a welcome  idea and the first of it kind not only in Adamawa  State but the north east  as a whole where a serving  commissioner will  put aside all the flamboyant  lifestyle  of and executive  member of a state and but on the shoes  of an ordinary  worker  just to impact  knowledge  into his workers.
I therefore call on all the good people of Adamawa  State to support  the administration  of Senator  UMARU jibrilla bind own and the APC government  as they are set  to introduce transformed  policy's  that will better the life of the ordinary  citizens.
Sajoh: What a humble commissioner
Sajoh: A commissioner moving with the changing world
Sajoh: The mouth piece of Adamawa state
Sajoh: A partner of the progressive Governors
Sajoh: Bindow's willing tool of development
10:11
Adamawa Daily Reports
Opinion
Email ThisBlogThis!Share to TwitterShare to Facebook