SPECIAL REPORT: RESIDENTS BEGIN TO EXPERIENCE FLOW OF WATER IN THEIR TAPS. 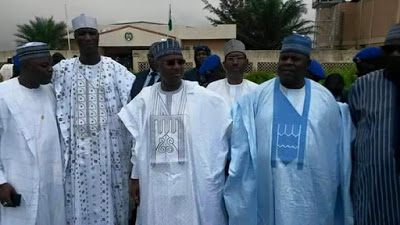 Provision of portable drinking water to the citizenry is the responsibility of every responsible Government. However previous Governments in Adamawa state have done their best to achieve that responsibility of providing portable drinking water to its citizens but it has always been very challenging. As a result, citizens of the State have been forced to resort to alternative means of obtaining water such as sinking of boreholes in their homes, digging wells or in a number of cases relying on water hawkers popularly known as "mai moya"
For instance Bajabure Federal Housing Estate is a satellite town in the outskirts of Yola the Adamawa state capital with most of the residents being retired and serving civil servants, politicians, business among others. For long the people have yearned for the Provision of Water in their area but they could not do so. However, the Government of Senator Muhammad Umar Jibrilla is set to change that.

As the common slogan stipulates, Bindow for social Change BSC! right during his campaigns he promised Adamawa people developmental programmes that will traverse all the nocks and crannies of the state. The residents of Bajabure Federal Housing Estate are one of the first beneficiaries of the fulfilment of the promises made by Governor Mohammadu Umaru Jibrilla in the areas of portable drinking water as they now see water running in their taps after many years of not getting water from water board.
They said shortly after the visit of the Commissioner of Water Resources Mr Julius Kadala, and a team of officials from the State Water Board on assessment visit to the area, work on provision of water to the residents commenced immediately with the result that they now have started experiencing water flowing from their taps. This has made them feel very appreciative of the giant strides of Governor Muhammad Umar Jibrilla.
Findings by adamawadailyreports correspondent revealed that Senator Muhammad Umar Jibrilla has already granted an immediate approval for the construction of more over head tanks in phase 1 and the extension of additional eight taps to the four existing ones to enable all the Residents of the area get access to portable drinking water.