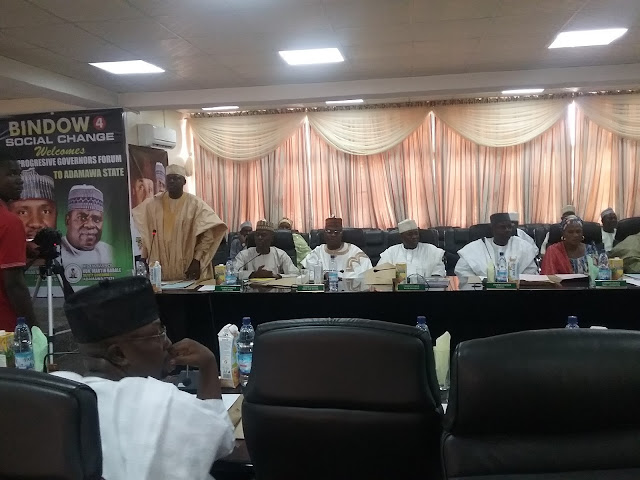 Today being Wednesday the 11th day of November 2015, the Adamawa State Government in its strive for excellence and continuity in the state has inaugurated an Economic Management Team for  the control and management of the economy of the state at the Council Chambers, Government House Yola.

Governor Muhammad Umaru Jibirilla charged the members of the team to seek ways of improving the economy of the state.

Represented by the Deputy Governor Eng. Martins Babale in his remarks drew the attention of the Economic Management Team on the present financial crisis in the state and country at large. He added that the monthly allocation of the state has drop down to an unbearable state and that the government had to strive to pay worker’s salaries.

Eng.  Martins also pointed out that the team will also play an advisory role on matters concerning state Economic policy that could lead to the economic growth and sufficient utilization of the state resources.

Eng. Babale had also emphasised on the need for the team to take off as soon as possible. Adding that the members are expected to strategies on how to ensure that the economy of the state is stabilised. He concluded by saying that “we want results”.

While responding on behalf of the team, Hon. Commissioner Ministry of Finance and Budgeting Hon. Mahmud Yunusa thanked the Governor for giving the members of the team the opportunity to serve in that capacity.

He pointed out that during the last National Economic Councils meeting,  the Governor of  Central Bank of Nigeria  Mr Godwin Emefiele said that the resources  has dropped down and it will continue to drop as the result of the present price of crude oil in the market.

However, he assured that the team will strategies on how to tackle the lingering economic crisis in the state. Hon. Yunusa had also called on the people of the state who have great and positive ideas that will help in the success of the committee to come out and contribute for effective results.

On a final note, Hon. Yunusa congratulated the members of the committee; he added that it is a big challenge for them and that no excuse will be taken from them but, positive results.

The committee is however expected to submit a weekly report to the; Executive Governor, the Deputy Governor and the Secretary to the state Government (SSG) on the economy of the state.