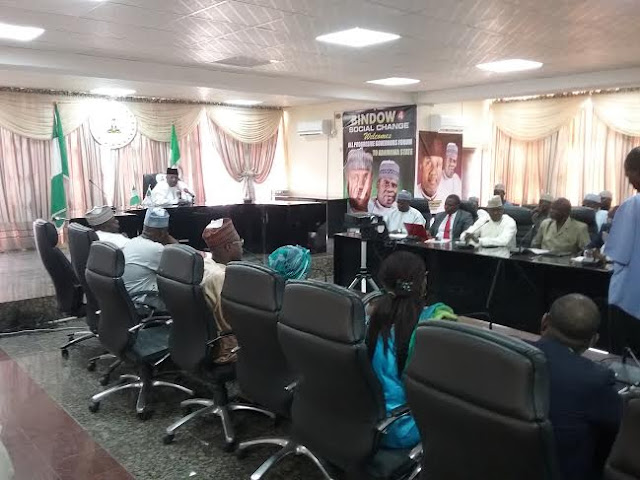 By: Yunusa Abdullahi
Governor Muhammed Umar Jibrilla has inaugurated members of the Adamawa State Committee on Revenue Generation.
While performing the inauguration at the council chambers of the Government House Yola, the Governor said “setting up of the committee  is not only timely but  necessary  in view of the dwindling economic  of the state and the country at large”.
He explained that the idea of setting up the committee is to identify the revenue sources and to block other linkages of internally generated revenue of the state.
He assured members of the committee his total support and cooperation, stressing that the committee is expected to be transparent while discharge its responsibilities .
In a vote of thanks ,the Chief Executive Officer of Discovery  Cycle Professionals Mr Iliyasu Buba Gashinbaki  thanked Governor Muhammed Umar Jibrilla  and members of the State  Executive Council for the support and cooperation  being extended to his company and promised  that  the  committee  will do its best by ensuring that the internally  generated  revenue  (IGR) of Adamawa state  is enhance for the betterment  of the people of the state.
Members of the revenue  committee  includes
1.    Governor Muhammed Umar Jibrilla  - Chairman,
2.    Deputy  Governor Engr.Martins  Babale  interim - Chairman,
3.    Commissioner of Finance  Mahmud Sali Yunusa  - Members
4.    Commissioner of Commerce  Abubakar  Isa Daware  - Members,
5.    Commissiner for Justice Barr Bala  Silas  Sanga  - Members
6.     Executive Chairman state Board of Internal Revenue  Aminu Tuta  - Members
7.    Chief executive officer of Discovery Cycle Professionals Mr Iliyasu Buba Gashinbaki  - Members