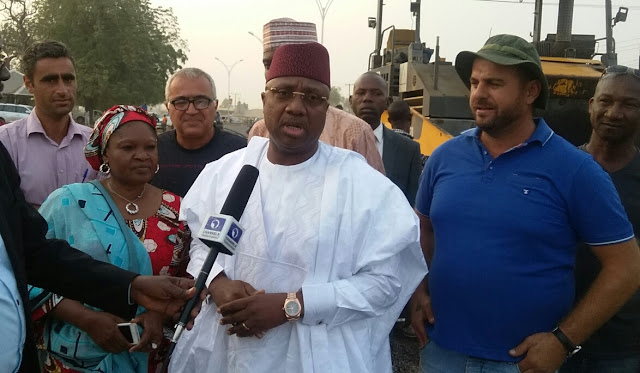 At the road rehabilitation site, Governor Bindow reassured the people of Adamawa State the commitment of his administration to providing them with laudable projects that will affect their lives positively. The people of Adamawa State voted us into power to provided them with necessity of life. He promised not to disappointed them. The ongoing road constructions across the state is just the beginning of the change they voted us for. “By June 2016 about 35 roads will be ready for commissioning”. President Muhammadu Buhari will be invited to commission them he added.

The Honourable Commissioner of Works Barr. Lillian Stephen Nabe said that the leadership of Senator Mohammed Umaru Jibrilla Bindow has approved the rehabilitation of Galadima Aminu Way and Justice Buba Ardo Road. The road rehabilitation will commenced from PZ Round about up to the Government House Junction she added. The Commissioner further advised the general public to take alternative roads to their various destinations, as only one lane will be open for traffic. 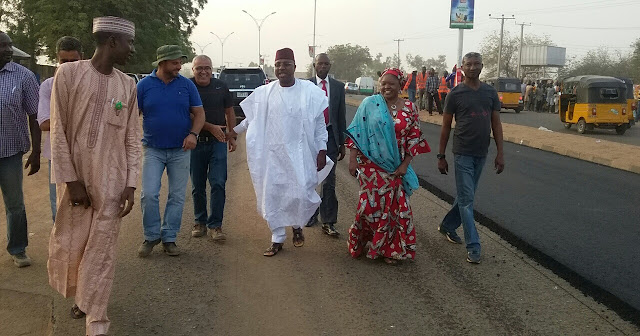 The ongoing road rehabilitation of Galadima Aminu Way and Buba Ardo Road  is handled by Triacta and Co Nigeria Limited. The spoke man of the company Walid Aboujoudi, assured the state qualitative road constructions handle by his firm across the state.
His excellency, Senator Mohammed Umaru Jibrilla Bindow was accompanied by some politicians. Also present at the site to over see the road rehabilitation were: the Honourable Commissioner of Works Barr. Lillian Stephen Nabe, Permanent Secretary Ministry of Works Barr. Yakubu Ngwale, Director Civil Engineering Ministry of Works Engr. Adullahi Farouk and Deputy Director Ministry of Works Engr. Sulaiman Mohammed.