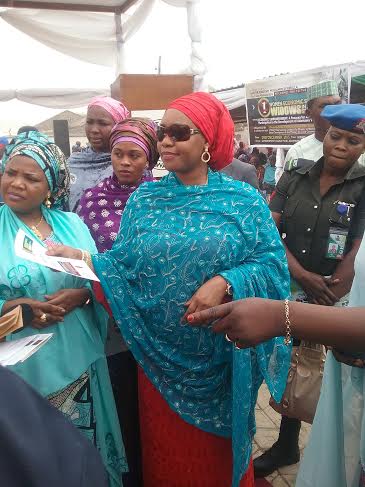 PROFILE AND ACHIEVEMENTS OF HER EXCELLENCY, WIFE OF THE EXECUTIVE GOVERNOR OF ADAMAWA STATE, HAJIYA MARYAM MUHAMMAD UMAR JIBRILLA SINCE COMING ON BOARD

In the redefined national quest for meaningful development, women occupy the central pivot and most critical factor. These in clear terms explain why equal opportunities for both genders to become very imperative for development to strive.

Women in Nigeria occupies vital position in the socio-economic and political development of the entire society.

Sadly enough however, a woman is seen in the context of national development as a stereotyped, sheepishly docile, passive, submissive, a hostage, a liability and a subject, just to mention but few. These are brutal attributes that were hitherto, and in some extreme cases, to date are labeled against  women.

This unfortunate scenario has led to the formation of barrier between a woman and development stride. For this reason, many at times, woman contributes to national development unnoticed, and regrettably totally deprived of the opportunity to exploring and exploiting her natural endowed potentials for the betterment of societal and human welfare.

The quest for the creation of opportunities where a woman contributes as much as the man do for the general societal development has been muzzled away, hence the continued dependent by women even when they have what it takes to offer and when properly harnessed could serve as an instrument of societal growth.

Indeed, the aforementioned traits are simply categorizations that Her Excellency, Hajiya Maryam Muhammad Umar Jibrilla does not fit into. In fact, quiet on the contrary, Hajiya Maryam, a woman of passion and compassion has defied such categorization to work diligently from the onset with passion coupled with compassion. This has placed her gains on the table, even though with pains to be counted in arriving at her present state of pride.

Born to the family of a prominent Agriculturalist, a Technocrat, a Daura based traditional title holder and above all, a statesman of honour, Alhaji Sani Zangon Daura, a former Minister of Agriculture and Dan Masani Daura, schooling for the then little Maryam was an obligation that must be fulfilled. Amidst highly challenging male dominated educational set-up, she stood her grounds, meandered her ways and emerged as a proud achiever.

Hajiya Maryam, started her educational pursuit at the Capital primary school Kaduna. After acquiring her First School Leaving Certificate, she gained admission into Federal Government College, Bakori in Katsina state, where she obtained her Senior School Certificate in Education. 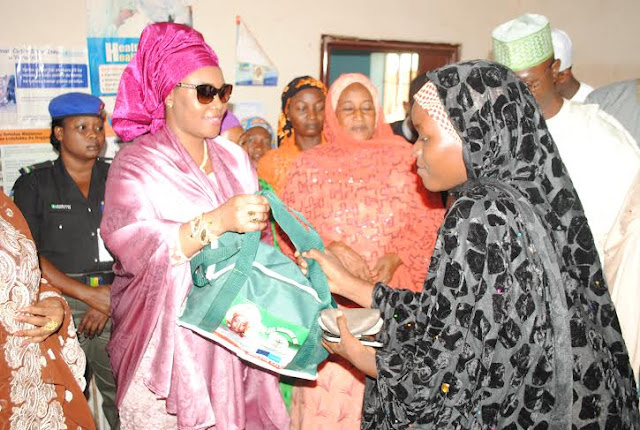 Coming out with flying colours, Hajiya Maryam immediately got herself placed in the school of Management and Social Sciences, Bayero University, Kano for her Bachelors of Science, in Political Science. Having performed creditably well, Hajiya Maryam immediately enrolled for her Masters Degree in Business Administration (MBA) in the United Kingdom. Being brought up in a highly serene environment, the Governor’s wife got enticed with peace and stability, an attribute that informed her choice of Widows and Orphans as focal point in her contribution to the development of the entire human race.

Hajiya Maryam Muhammad Umar Jibrilla became a wife to an industrious fellow whose business traits is second to none and who also rose to become a Senator of the Federal Republic of Nigeria and later Executive Governor of Adamawa state by dint of Devine Providence. Since then, she has performed creditably well.

On coming on board as wife of the Executive Governor, Adamawa state and a mother of four she was confronted with the ugly event of Boko haram insurgency that devastated almost every family in the state. The wife of the Governor instantly intervened by ensuring that Internally Displaced Persons IDPs are not left to their fate. She does that by constantly visiting them so as to give them relief and hope. During such visits, food items, clothing and domestic assorted materials were donated to ensure the comfort of the IDP’s.

Another terrible situation that the state had to contend with was the reoccurrence of incidence of bomb blasts in the state which claimed many lives and rendered several others injured. 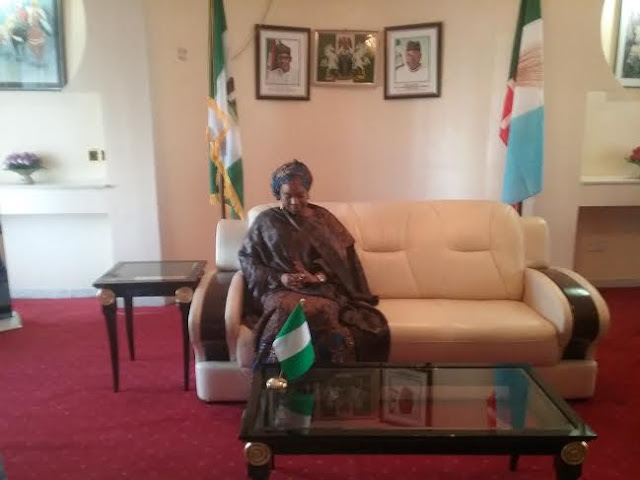 A caring mother that she is, Hajiya Maryam Muhammad Umar Jibrilla has always been at the forefront of early callers to the victims to sympathize and provide succor for them. At every such visit, she has always doled out money to ease their treatment process.

It suffice this to say, as a Number One Woman in the state, womenfolks look up to her for direction and more assistance. Despite the fact that Her Excellency Hajiya Maryam came on board when women programmes have been stripped of government sponsorship, she did not hesitate to ensure that the dream of women come true.

Considering the difficulties that most women, especially expectant mothers and adolescent girls go through, due largely to near absence of health and other essential services, Hajiya Maryam Muhammad Umar Jibrilla was so much concerned about the increasing rate of maternal mortality rate. She meticulously observed that the trend is striking more and more mothers, thereby causing much misery to hundreds of individuals and their families.

Regretting the ugly trend, the wife of the Governor insisted that pragmatic intervention measures have to be put in place to curtail the increasing effects on the society. To this, she has mobilized for the provision of Mama Kits for distribution to pregnant women so as to ease their process of delivery. She has since flagged off the distribution at the Specialist hospital, Yola.

Owing to her tenacity, she has mobilized resources for the purpose of improving the lots of the vulnerable groups within the society.

With the epithet Mother Of All which shows her as an epitome, a successful wife, Hajiya Maryam Muhammad Umar Jibrilla is taking humanitarian intervention as a child of necessity for the first family and the people of Adamawa state. Punctuating these strides however, is her constant touch with the vulnerable groups, especially widows, orphans and Internally Displaced Persons. Her agility, carefulness and tenacious nature have earned her a reputation from members of the society.

Her choice for these categories of people in need was quiet informed by her concern for victims of collective social forces in a capitalist society like ours where the norm is that of survival of the fittest. Her choice for Widows and Orphans for instance is quiet deliberate because Hajiya Maryam has always insisted on the integration of the vulnerable groups into the mainstream of the society. 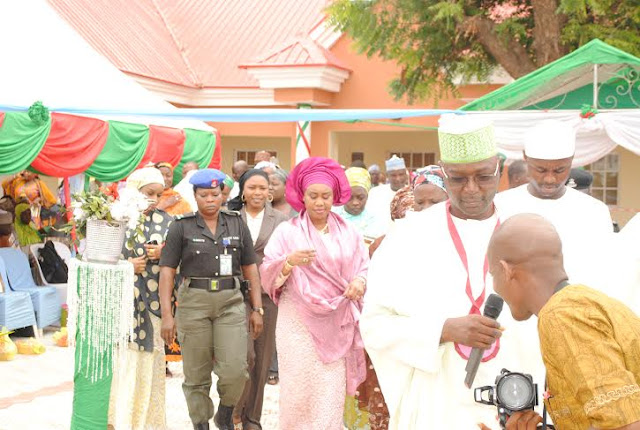 The case of widows in Adamawa state has assume a worrisome dimension, with their number souring to an unbearable height in recent times, owing to the activities of insurgents. Their situation is further worsened because of additional responsibilities of bringing up the orphans they were left with.

At the Orphanage Home Karewa, Hajiya Maryam ensured that, the home was upgraded to a first class Motherless Babies Home. The home was before now, seen by many as a death trap. However, with her intervention, the home has been turned into a worthwhile place to live a descent and comfortable life. For this, many call her “Gatar marayu” meaning the comfort of orphans.

As detribalized Governor’s wife, she had a cause to invite women from different shades of opinion and irrespective of status to dine and wine as well as exchange realistic views that are capable of moving the state forward.

An industrious and versatile woman that she is known for, Hajiya Maryam is ready to utilize every single opportunity that come her way for the furtherance of democracy, good governance and better life for all. Given her magnanimity and zeal to transform things for the better, those who know her always refer to her as an Ardent Listener, a friendly and meticulous instructor, an articulate boss and a cheerful giver. For the gatar marayu, to say that the sky is not only her limit but starting point, only amount to understatement.