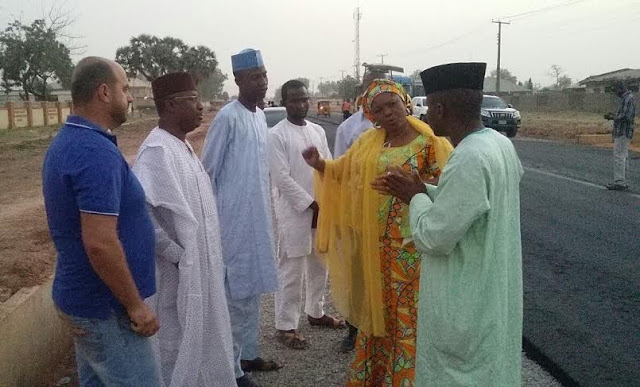 By: Barnabas Augustine
The Honourable Commissioner of Works Barr. Lillian N. Stephen has today 7th December 2015 taken round His Excellency Senator Mohammed Umaru Jibrilla Bindow the Executive Governor of Adamawa State to the ongoing road construction sites at Wuro Jabbe and Jambutu. The Wuro Jabbe road construction which has reached over 95% completion will be put into use in the next 2 weeks says the commissioner of Works. 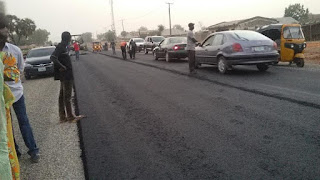 His Excellency expressed satisfaction with the quality of the road under construction, He said that his administration will focused on peoples oriented projects that will affect the lives of people directly. By God’s grace, the Governor said “I will fulfil the promises I made during my campaign to people of my state”.
Earlier on the Honourable Commissioner granted an interview with ATV correspondent, said the company handling the Wuro Jabbe road construction has 18 months within which to complete the project.
She added that by first quarter 2016, the Wuro Jabbe road, Jambutu Road network, Yola Town bypass rehabilitation and Damare road will be completed.
Liman Goni Adamu and Malam Abdullahi Ibrahim thanked the Governor on behalf of the Jambutu community for wiping their tears. Adamu narrated how they suffered from flooding.  “At a point in time, we were asked to contribute 10% of 7 million naira to World Bank to construct drainages in Jambutu. We have contributed the 10% which is 750,000 naira, the money was deposited in UBA bank account as am talking to you now nothing was done in that regards, When this road construction started, we were all convinced that the 7 million naira couldn’t have construct the drainages we needed” he said. 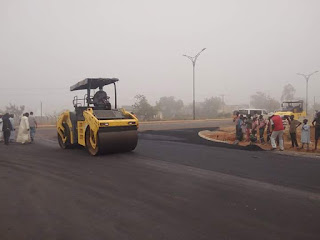 Finaly, Governor Bindow solicited for their prayers to the State and the Country at large so that meaningful and laudable projects promised will be accomplished.
Among those that accompanied the governor are: Hon. Sulaiman member representing Yola North in the Adamawa State House of Assembly and other politicians.
08:19
Adamawa Daily Reports
News
Email ThisBlogThis!Share to TwitterShare to Facebook