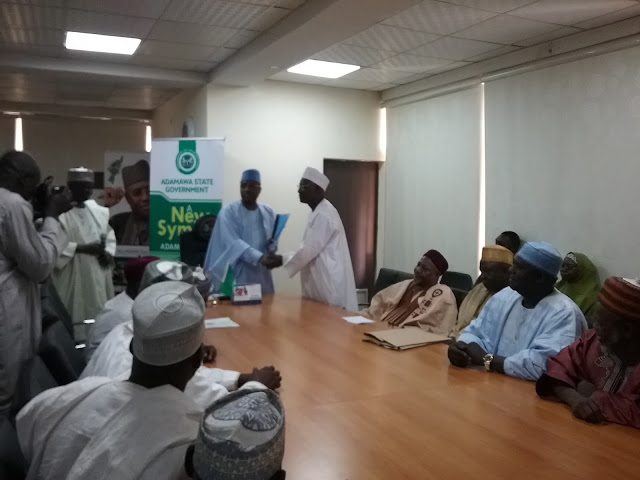 While submitting the report, The Adamawa state  2015 Amirul - Hajj  Alhaji Nuhu Wakili said the  report highlights some of the achievement and  lapsis that needed to be sustain  and address for the better Hajj performance in the future.

The Amirul -Hajj had informed  Governor Muhammed Umar Jibrilla  that  1,922 pilgrims  and Nine officials performs  2015 Hajj  from the state, announcing that Fourteen pilgrims lost their lives out of which  Nine died  at the stampage, Three died as normal death while Two were reportedly missing, noted that there were no major ailments recorded by the pilgrims at the Holy Land and commended the arrangement put in place by the Medical team as excellent and examplary. 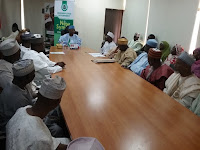 The Amirul-Hajj stated that the  committee has suggested  a number of recommendations for  government to consider in the  report which  includes :The role and functions of the Amirul -Hajj  before and after the Hajj exercise.
The report recommended that government  should  review the Laws that established  the state  Muslim Pilgrims welfare  board with a view of  amending it so as to reposition the Board and provide  the necessary  political and Religious administrative and  technical  leadership and  guidance.

The report also recommends that  there should be proper  coordination  of press coverage of the  whole Hajj exercise  for record  and future references adding that Three state owned media  ( ABC Yola,ATV  and APL) be involved during the pilgrimage at the  Holy Land.

Alhaji  Nuhu Wakili expressed  gratitude to Governor Muhammed Umar Jibrilla for finding members of the committee  worthy  to serve as government  delegation to Saudi Arabia  for the 2015 Hajj exercise and also  commended  the entire state Pilgrims  for their patience, perseverance, and Law abiding  especially on their feeding at the Holy Land. 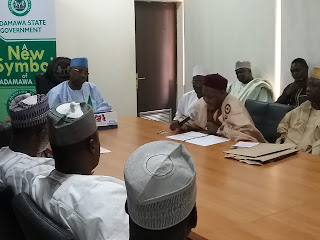 While responding Governor Muhammed Umar Jibrilla  assured that his government will study the recommendations of the  committee for proper implementation, and  for  successful future  Hajj operation  in the state
The Governor also  appreciated  the leadership  of the  delegation  for a job well done and condoled  the families of those  who lost their  lives  while performing spiritual duties at the  Holy Land.