What is avian influenza and what causes it?
Avian  influenza  is  a  viral  disease  that can  affect  bird  species  throughout  the world.  The  disease  can  vary  from  mild to severe, depending on the virus strain involved. The most severe strain, called highly  pathogenic  avian  influenza (HPAI), is caused by viruses with H5 or H7 surface proteins. Most human cases result from close contact with sick  birds.


What animals get avian influenza?
Avian  infuenza  primarily  affects wild  and  domestic  bird  species.  Waterfowl can carry the disease without  becoming  sick.  Poultry  are very susceptible to the disease and can die in large numbers.  Some strains of the virus can affect mammals, such as pigs, cats, horses, dogs and ferrets.

Is it contagious ?
In birds, avian influenza is spread by  direct  contact  with the fecal droppings  or  respiratory  secretions  of infected  birds.  The  virus  can  live  for  a long  time  in  the  environment  and  can also  be  spread  by  objects  or  fomites (e.g.,  shoes,  clothing,  equipment)  that have been contaminated with the virus.


What are the signs and symptoms of Avian Influenza?

Poultry affected by avian influenza will  appear  depressed,  have  ruffled feathers and are unwilling to eat. Birds may have watery diarrhea that starts  off  bright  green  and  changes to white. The combs and wattles are often swollen and can turn blue. Swelling may occur around the eyes and neck. Legs may have pin-point hemorrhages.  Egg  production  drops and typically stops. Rare cases can affect the brain causing twisted heads,  circling,  or  paralysis.  Sudden death may occur.  Infected  humans   will  have  fever,  cough  and  breathing  difficulty;  some may die. 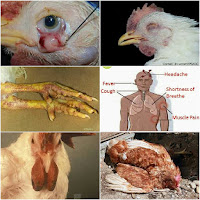 How do humans  get avian influenza?
Yes. Humans can be infected with the avian influenza virus, but most cases have involved very close  direct contact  with  sick  poultry.  Some  cases of  person-to-person  transmission  have been reported, but are very rare. Clinical  signs  in  people  can  include  swelling  and  reddening  of  the  tissues around  the  eyes  (conjunctivitis),  flu-like illness (fever, body aches). Death can occur in rare cases. Avian Influenza is  a  viral  disease of wild and domestic birds.
Who should I contact, if I suspect avian influenza? 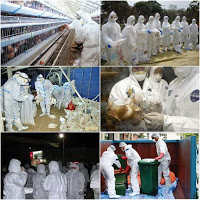 How can I protect my animals from avian influenza?
Prevent contact between poultry and  wild  birds,  especially  waterfowl. Use strict biosecurity measures, such as  cleaning  and  disinfection  of  bird housing facilities as well as rodent and insect control measures, to prevent spread of the virus. Vaccines may be used to help control an outbreak.

How can I protect myself from avian influenza?
Avian influenza infection in people is rare. Wear protective clothing such as masks, gloves, and safety glasses., when  working  with  birds  or  poultry. Avoid  touching  your  eyes  or  mouth until hands have been washed thoroughly  with  soap  and  water. Antiviral medication or vaccines may be used during an outbreak situation. People working with the virus in laboratories  or  on  vaccination  crews should take extra precautions. 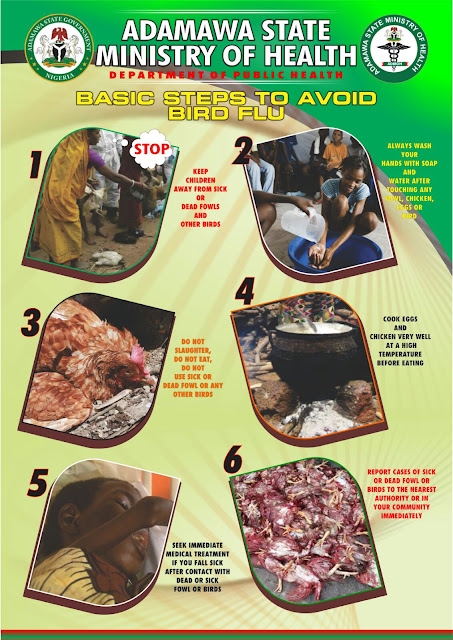