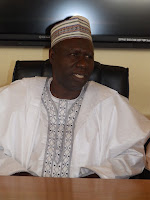 The effort by the Ministry of Information under the leadership of Hon. Ahmad Ibrahim Sajoh to explore all possible platforms to publicise the activities of the present administration to the generality of the people of the State and indeed the outside world is to say the least commendable.

Among the various news channels the Ministry is exploring include; the Adamawa Daily Report, an online platform that reports the activities of government almost immediately as it unfolds and managed by the Ministry of Information is already doing very well with well over 400 viewership at a go. Also, the official website of the State Government with e-governance platform is at the threshold of being generated and very soon it will be on the shore to also showcase Adamawa State to the world.

The Ministry is also partnering with some other associates such as the Dandalin Siyasa-Online Forum; National and International Media and the local media networks; to publicise the efforts the present administration is making towards transforming the dwindling fortunes of the State due long term neglect and the ones recently created by multiple systems occasioned by multiple changes in leadership of the State. No doubt, Adamawa State is having the best of its publicity at this time.

To further publicise the activities of the government in addition to the platforms earlier mentioned, Hon. Ahmad Ibrahim Sajoh on assumption of office inaugurated a committee to produce three books one of which is an Investor’s Guide to further tell the world more about Adamawa State and what the government is doing especially at this time of security challenges and to expose the hidden treasures of the State to willing investors both national and international to take advantage of the abundant endowments that abound in the State.

The Effort to fully open up Adamawa State to the world and the ability to sustain the tempo throughout the period of this administration’s tenure is not in doubt with Hon. Ahmad Sajoh on the helms of affairs. The approach, commitment and consistency put in place so far in managing all the networks is a clear indication and an assurance that the effort and the project is not only introduced to pass time but sustainable and will stand the test of time.
The Ministry until recently was moribund interms of functions, posting of Information Officers to various Ministries, Parastatals, Agencies and MDA’s was done only to decongest the Ministry’s Headquarters, this can be proved by the non equipping of this Information officers to carry out their functions effectively, some of them were made to become brain drains and dormant due to the factors inherent in the Ministry. Certain responsibilities and benefits were shared only between some privileged few within the Ministry; one may not be mistaking to call them kitchen cabinet.

But the story is different now, the system is changing, the Information Officers can testify without an iota of stammer that the system is now better. Over twenty Information Officers have been trained and fully equipped with digital gadgets to enable them function effectively, some of them who before now were seen and considered as analogue are now functioning to the greatest dismay of every one and proving their worth. Responsibilities are now shared strategically. A lot of staffs who hitherto had no schedule now have and are functioning well.

It is not an over emphasis to say that Hon. Ahmad Ibrahim Sajoh is a strategic planner, a workaholic who believes that the reward for hard work is more work. He is a people builder and an inspiration to anyone willing to learn and become a better person tomorrow. I strongly believe that the better days of the Ministry of Information and the better days of selling and showcasing the policies of government of Adamawa State and its activities are here.

The system of strategic information management being deployed by honourable Ahmad Ibrahim Sajoh is systematic and completely different from the ones we use to know, devoid of empty noise and propaganda. Sajoh is an apostle that preaches seeing is believing, whenever he is out talking, he talks straight with physical manifestation of events to back it up, on several occasions he challenged media men to go round the state to see for themselves what the government is doing so they could tell it to the outside world. On the other hand, he is a man of strong faith who believes that the future will always get better and so encourage people around him to be hopeful. No doubt, the Ministry of Information and indeed Adamawa State have never had it this good in terms of information management and therefore it is simple to say that the better days of strategic information management in the State are here.

The Media Tour is another milestone recorded by Hon. Ahmad Sajoh, it is the first of its kind at least in the recent times. The tour has since developed the concept of convening a town hall meeting of all Adamawa indigenes in diaspora to discuss the way forward for Adamawa State. Before now, the hope of developing Adamawa State appears to be an impossible task with the stagnation and under development over many years but with the recent strides, developing the State is a doable project that must be embarked upon.