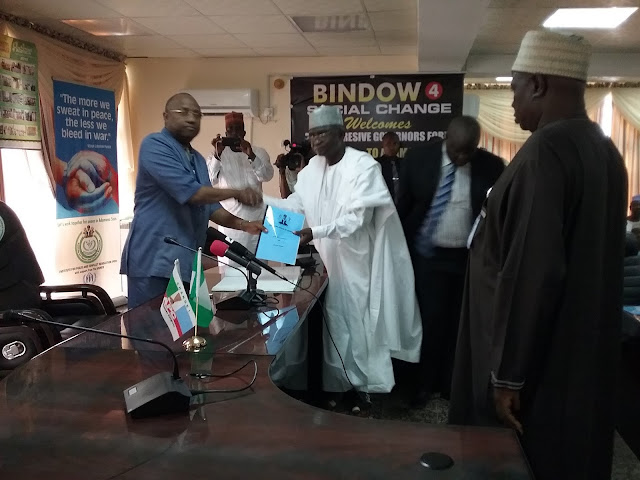 Public office  holders  in the state  have been  chatted to be  prudence  and accountable in the  discharge of their official responsibilities. Governor Muhammed Umar Jibrilla who  gave the  charged  while  presiding over the swearing in Ceremony of  Alhaji  Umaru Barkindo as Permanent  Secretary  in the State Civil Service at the  Banquet Hall of the Government House Yola.

The Governor  called on the newly  sworn in Permanent  Secretary  to  abide by the oath of office taken while conducting  his official  duties. Governor Muhammed Umar Jibrilla also  urged  the people of Adamawa State to be united and  to  give  his administration  support and cooperation in order to provide democracy dividends to the electorates, explaining that  "We want unity in this state which is very paramount, with out peace there is nothing you can do ,let the people know that there is  development  on ground  that is the major objectives of this government  to carry every body  alone and importantly  to be accountable  to our people "

In his response, the  newly  sworn in  Permanent  Secretary  Alhaji  Umaru  Barkindo  thanked Governor Muhammed Umar Jibrilla for giving  him the opportunity to serve in the State  Civil Service and  pledged  his total support and cooperation to the  present administration under Governor Muhammed Umar Jibrilla. He hsd also  promised to abide by the oath of office taken  in the  discharge of his responsibilities.

The  oath of office and  secrecy  was administered by the Solicitor-General and  Permanent  Secretary  Ministry  for Justice  Barrister  Suleiman  Muhammed  who represented the  Attorney -General of Adamawa State.
12:54
Adamawa Daily Reports
News
Email ThisBlogThis!Share to TwitterShare to Facebook