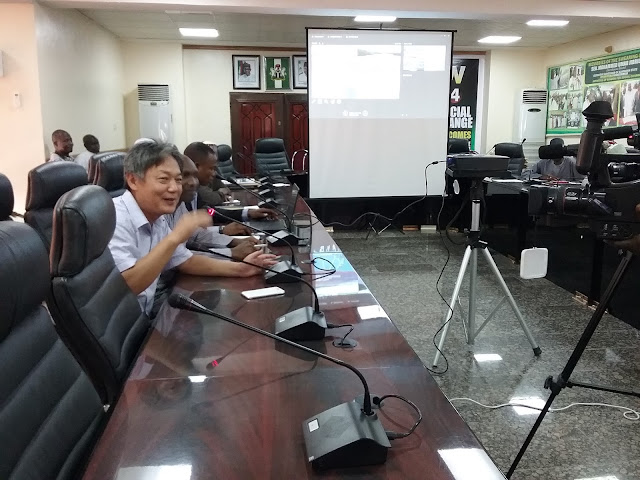 
In a screen  presentation  by Chinese  Electricity Company  at the Council Chambers of the Government House Yola, the  representatives of the  company  Mr  Liu Shiea  and Solomon Joshua who made the presentation  to the  members of the State Executive Council  explained that the  company  intent to build One Hundred Mega Watts of  Solar Power Plant  of energy  in Adamawa state  under Build Operate and Transfer  (BOT) bases for about Twenty five years  before  handing over the  project to the  state government.

The  representatives of CHINTAI said  that their company  focuses it's activities  on Solar  Energy  Generation, pointing out that  if completed the  Adamawa State Government  will  benefit  Five  percent of the  total profit gain on the  project  and will also provide  employment  to the  unemployed youths across the state.

The  leader of the  Chinese  Delegation  Mr  Liu Shiea  requested the Adamawa State Government  to provide a  plot of  Land  and Security  for the  actualization  of the project  in Adamawa state.

While responding, Governor Muhammed Umar Jibrilla  expressed the State Government  readiness  to partner with the  Chinese Solar Power Company  for the provision of  electricity  to the people of Adamawa state. The Governor had also assured that  the State Government  will give all the necessary support and cooperation to  see that the  project  become a  reality for the overall benefit of the  common man.

During the  presentation,  some members of the State Executive Council  also commended on the presentation  made by CHINTAI  Energy Company. At the end of the  presentation,  a committee was mandated  to liase with CHINTAI  to work out modalities for the actualization of the project which includes Commissioners of Agriculture, Land and Survey, Housing and Urban development, Finance and Budget, Rural Infrastructure, Attorney -General of the  State, Managing Director of Adamawa  Investment Limited as well as Energy Department  of the Government House Yola .
12:59
Adamawa Daily Reports
News
Email ThisBlogThis!Share to TwitterShare to Facebook