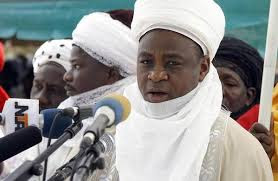 The Sultan Foundation for Peace and Development, an NGO set up by the Sultan of Sokoto is to mobilize assistance for Internally Displaced Persons (IDPs)  in Adamawa, Borno and Yobe states.

The Director Programme of the foundation, Mallam Aminu Inuwa, made this known in Yola when he led a delegation of members of the foundation on a courtesy call on Lamido of Adamawa, Alhaji Barkindo Mustafa.

Inuwa said the foundation which had already visited Borno and Yobe states to  problems of the IDPs with a view to mobilized needed support and assistance from stakeholders.
"We will now go back and develop a brochure to be use to marshal donation and support to the IDPs''.
"We want to support families to be economically independent." Inuwa said.

He noted that the foundation would accord priority attention to widows and orphans by providing skills acquisition training for the widows and education for the orphans and other vulnerable children affected by the insurgency. He said that the foundation set up by His Eminence Sa'ad Abubakar has the promotion of peaceful coexistence and support for the underprivileged as its cardinal objectives.

While responding, the Lamido of Adamawa, Alhaji Barkindo Mustafa, lauded the commitment of the foundation to peace and support to the less privilege in the society and declared his full support to the foundation. "The Sultan is a man of peace and a person I am committed to work with in pursuing peace and peaceful coexistence among the diverse people of this country." Mustafa said.

Similar courtesy call was made by the foundation to the Deputy Governor of Adamawa State, His Excellency Engr. Martins Babale who assured them of government's support and cooperation.

While in Yola, the foundation delegation which comprises of Sheikh Bala Lau, Sheikh Hussaini Zakariya, Uztaz Adamu Aliyu, Uztaz Ibrahim Disina and Uztaz Abdullahi Mohammad visited the IDPs camps where they donated some items and purchased pomade and other  products made by some women and girls  that underwent skills acquisition training that was initiated and funded by United Nation Population Fund UNFPA in collaboration with Adamawa State Ministry of Women Affairs and the State Planning Commission .