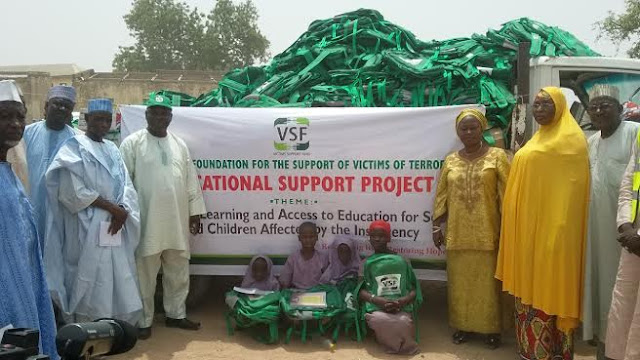 In a quest to ensure that the Educational pursuit of Children in Boko Haram ravaged areas was not sturded,  the Nigerian Foundation for the Support of Victims of Terrorism, Victims Support Fund (VSF) partnered  with the Adamawa State Government.

The Commissioner further reminded Parents that the most durable inheritance to any child today is through moral and quality education. She therefore called on teachers and parents to make sure that the items donated are put to best used.

In his keynote address the Executive Director VSF Professor Sunday Ochoche  said,  the last time he visited Mubi was immediately after its recovery  by the Nigerian Militatry and Mubi was rudimentary and very skeletal, unlike  today Mubi is full of live with school and economic activities all over. He further reiterated  that Education is one of the major areas of focus  by VSF and Mubi North, Mubi South and Hong  are identified as key  LGAs in Adamawa State for  intervention by VSF since education is critical to dealing with root courses of insurgency that we are managing today. 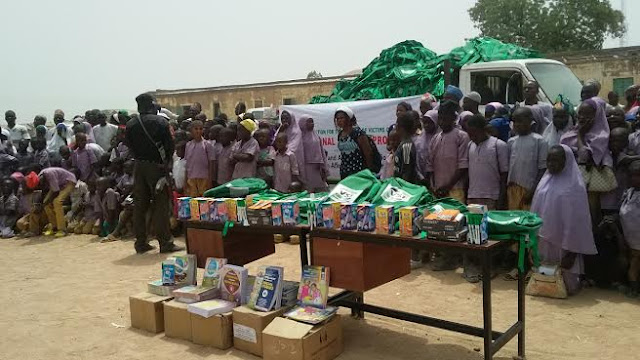 In his vote of thanks, the Permanent Secretary of  the  Ministry Alhaji Bashir Yerima D. Tukur  who happens to be an old student of Mubi II the Venue of the event thanked the VSF for their  support  and advice the pupils to reciprocate the kind gesture with excellence.

Immediately after the VSF event  Professor Farauta  proceeded to GSS Mubi where a total renovation initiated by His Excellency the Executive Governor of Adamawa State Senator Mohammed Umaru Jibirilla  was on going, the Commissioner was taken round the project site by the the Representative  of SAKIN Intergrated Services  Nig.  Ltd. The company handling the project. Where  she  expressed satisfaction with the work done so far  and urged  the Contractor to speed up activities as raining season approaches.
The Commissioner was how ever at the Mubi Technical College, where she told the two  Principals, Senior and Junior to exercise patients as Government is working out modalities to see that all schools not just in Mubi are  renovated in phases, due to financial  challenges around the world yet, the Government  is determine to live no stone unturned in all sectors. She also called  on students to always keep their environment clean and habitable.
07:05
Adamawa Daily Reports
News
Email ThisBlogThis!Share to TwitterShare to Facebook