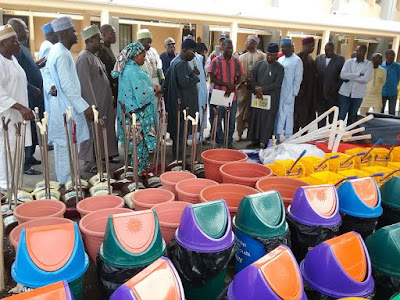 In an efforts to  keep  Adamawa State clean, One of the private sector in the state  Madugu Construction  and  Commercial  Company  had presented  Refuse  Evacuation  materials  to the Adamawa State Government.  While  presenting the  materials,  the Chairman  and Chief Executive of Madugu Group of Companies  Alhaji  Musa Garba who was represented by the  Cheif  Engineer  of the company said the presentation  of refuse materials  was necessitated  by the marvellous  construction  of on going  roads networks  construction across the state capital  and other  local government areas in the state.

He  explained that Madugu Construction Company  feels  its important  to contribute  its quota  towards developing  Adamawa state  and commended  Governor Muhammed Umar Jibrilla for his giant strides in developing Adamawa state. He also pointed out that in recognition  for the tremendous efforts  made by the present administration,  Madugu Construction  Company decided to  donate Ten rolls of high quality  executive carpets  for the ceremonial  reception for the protocol  department of the Government House, 240 Litre capacity of  Dustbins , 50 Litre capacity of Dustbins, Buckets for moppers, Twelve  Flower pots  among others. 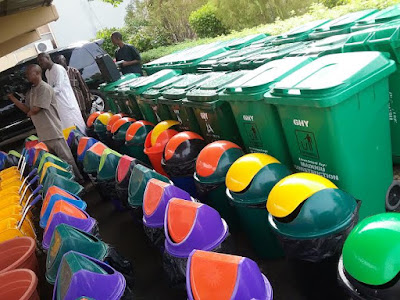 While receiving the items donated on behalf of the State Government, the Chief of Staff Government House Alhaji AbdurRahman Abba Jimeta expressed state  government's appreciations  and thanked Madugu  Construction and  Commercial  Company  for recognizing  the performance of  Governor Muhammed Umar Jibrilla  in the extend  that the  company feels it deem necessary for the private sector  like  Madugu to contribute their  quota towards what the Governor  is doing  in Adamawa state.

Alhaji AbdurRahman Abba Jimeta  assured that  the materials  donated  to the government  was done at the right time  because  the rainy season  is approaching, adding that  the items would be  utilised  judiciously  for the purpose intended  and  also directed the  Honourable Commissioner Ministry of  Environment to distribute the  items to various Ministries  and Departments of Government. He had also  called on  other private sectors who were operating in the state  to emulate  Madugu Group of Companies by reciprocating  government  gesture and  by seeing the state  and make their own contribution  especially  with the economic  crunch by the  government. He however lamented that government  alone can not  move the state forward  without the  support  and cooperation  of  private  organisations.
12:45
Adamawa Daily Reports
News
Email ThisBlogThis!Share to TwitterShare to Facebook