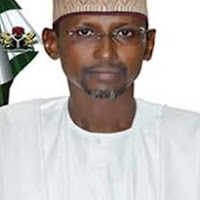 The FCT Minister, Malam Muhammad Musa Bello has challenged his Chief Security Officer, Mr. Ahmed Rasheed who has been promoted to the rank of Deputy Superintendent of Police to maintain high degree of discipline and loyalty to the nation.
The Minister gave this challenge on Monday while he and the FCT Police Commissioner, Mr. Wilson Inalegwu decorated Mr. Rasheed with his new rank.
While congratulating the FCT Police Command for the large number of its officers and men promoted, the Minister reiterated that promotion to higher rank calls for greater dedication and loyalty to ones organization and the nation at large.
Malam Bello explained that the huge number of police men promoted in the FCT Police Command is an indication of the FCT Police Commissioner’s sterling leadership qualities.
His words: “Usually, when people get promoted, the attributes for the promotion are usually most of the time, aligned with the person who was promoted. The reality is you can never be a good officer and excel in your career if you don’t have a good boss. So, we feel very delighted that Ahmed Rasheed is among those in your Command that has been promoted.”
According to him, “We also in FCTA are proud that one of us has been elevated because he represents the crop of officers that to a large extent, are the face of the new Nigerian police; hardworking, dedicated and very smart”.
“From what I have seen, haven worked with him for the last six months, I have no doubt that God willing, the sky is going to be the limit for this young officer,” he stressed.
The Minister added, “for you the Commissioner of Police, I urge you to continue with your good work of training officers because as you know, we need more and more policing within our communities. I’m sure that out of the 10,000 to be employed, based on what we have read in the newspapers, a number of them will be under your responsibility and I’m sure you will also guide and train them properly”.
Speaking earlier, the FCT Police Commissioner, Mr. Wilson Inalegwu noted that Ahmed Rasheed is a very hard working officer, consistently hardworking, courageous, diligent in his assignment and has demonstrated love for the Nigeria Police Force.
Mr. Inalegwu said he was not surprised that Mr. Rasheed was considered suitable for promotion to the rank of Deputy Superintendent of Police.
Muhammad Hazat Sule, FCAI
Deputy Director / Chief Press Secretary,
Monday, May 23, 2016.
23:01
Adamawa Daily Reports
press release
Email ThisBlogThis!Share to TwitterShare to Facebook