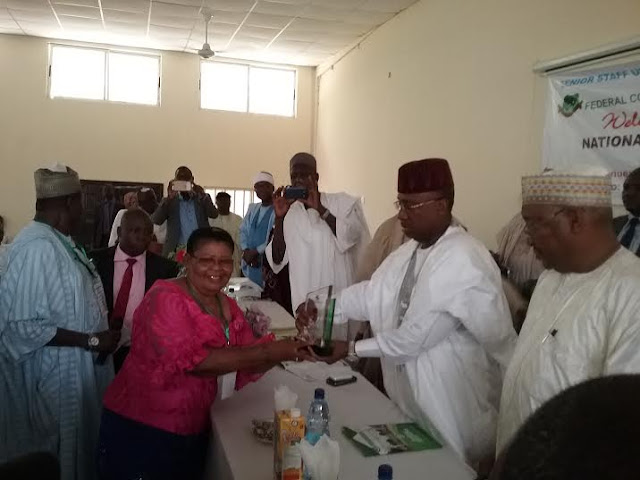 Governor Muhammed Umar Jibrilla has been honoured  with an Award of  Excellent by the Senior Staff Union of Colleges Of Education  in Nigeria (SSUCOEN ).

The  National President of the Union Comrade Mrs. Patience Amadi  who presented  the Award on behalf of the members of the Union during its 22nd National Delegates Conference of the Union said  SSUCOEN  decided to honour Governor  Muhammed Umar Jibrilla in view of his outstanding performance in rebuilding Adamawa State and also  for his immense contribution towards the development of Education sector. 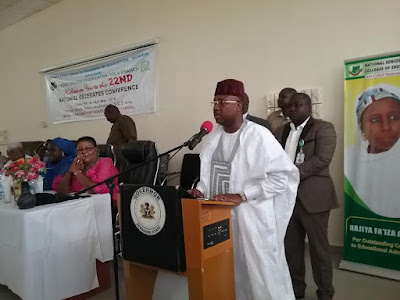 The  SSUCOEN  president also stated that  without  education  no any meaningful development could be achieved. She described Education as the bedrock of development in any society.

In his remarks, Governor Muhammed Umar Jibrilla said  in view of the  importance his government  attached to  education, Education Sector  remains top most priority of his administration.While  thanking SSUCOEN  for the  Award  confered on him, he assured that his government will continue to support educational  sector so as to move Adamawa state forward. "... and I will  always  associates  my self with this institution and SSUCOEN ,because of the importance that I  gave on education, honestly,  one would  compromise  everything  for education "he declared .

Governor Muhammed Umar Jibrilla also promised to  look into the  infrastructural decay of the Federal  College of Education  Yola and directed  officials from the Ministry of  Works  to liase with the  college  authorities in order to solve the issue of  bad roads around  the college. 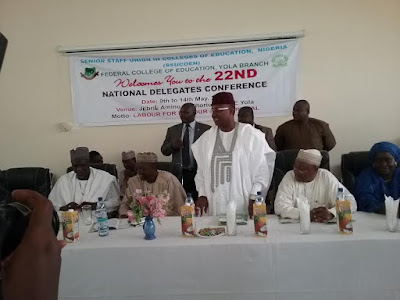 The Governor  however  thanked  President Muhammadu Buhari for his efforts in fighting insurgents in the  entire North East region as well as  maintaining  peace and security in the  country.
03:31
Adamawa Daily Reports
Email ThisBlogThis!Share to TwitterShare to Facebook