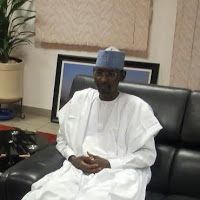 The FCT Minister, Malam Muhammad Musa Bello has today received the President of the Republic of France, Mr. Francoise Hollande, at the Presidential Wing of the Nnamdi Azikwe International Airport, Abuja.

The Minister also conferred the honorary citizenship of Abuja on the vising President and presented him with the key to the City of Abuja.

The Minister, who welcomed the visiting President of France to the City, described Abuja as the symbol of national unity of the country.

Malam Bello remarked that the key to the City of Abuja confers on him the Honorary Citizenship of Abuja, with all the rights and privileges.

He emphasized that this honour has been bestowed on the visiting President as mark of respect for the strong friendship and cordial relationship between the people of Nigeria and France.

President Hollande reiterated that Nigeria and France have long standing historical and diplomatic relationship that will be strengthened for the mutual benefit of the two countries.

He appreciated the honour done to him and personally expressed happiness to be an honorary citizen of Abuja city.