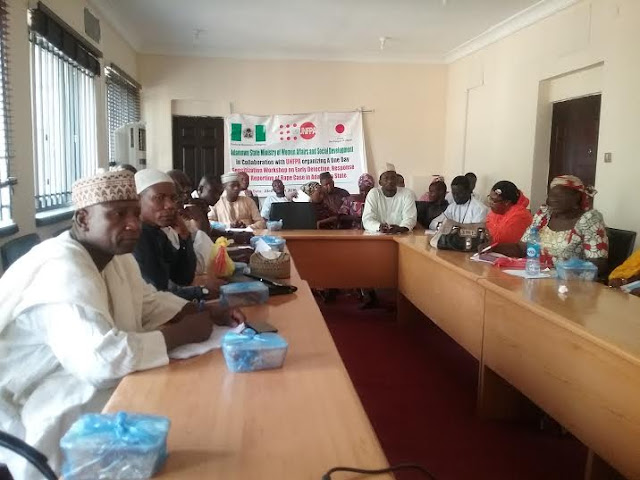 On 23rd of March 2016, Ministry for Women Affairs in collaboration with UNFPA organised a one day Workshop on Early Detection, Response and Reporting Rape cases in Adamawa state at Ministry for Health Conference Hall, State Secretariat.

According to Action Aid Programme Director Auwal Bashir, the aim of the meeting is to fill the linkages between the stakeholders and to join hands together in other to move the programme forward.
While deliberating on the issue of rape, a representative of FIDA Fatima Raji defined rape as having a carnal knowledge of a woman without her consent or against her will. She described it as a capital offense against humanity. Similarly, she mention some examples of Gender Base Violence which include; domestic violence, force marriage, a man beating his wife, female genital mutilation among others.
In the course of deliberation, a Director from State Planning Commission Mrs Gladys Dzarma who is also a stakeholder in the workshop said there  is need to involve traditional institutions and NGO in maping and relationship building, with CBO’s, FBO’s, and Religious leaders for reporting early information on rape, response and prevention.
However, a Medical Practitioner from Specialist Hospital Dr. Fadimatu Abubakar explained more on Clinical Management of rape. She said; “the first thing to do is to take the victim to a nearby hospital for treatment with a police”. She further said that, victims should be allowed to express themselves openly about their experiences before the doctors do thorough examinations, investigate and invite Psycho Social workers to do their job.
The stakeholders also realised that there is a need to liase with road transport workers and Keke drivers and sensitise them on the importance of assisting victime of GBV. It was also observed that there is a need to enlighten the public to report cases of rape, GBV and also learn to shun stigma.
The team further emphasised on rendering Psycho Social Support for the survivors of GBV and rape. It was found out that the Psycho Social Support being rendered by social workers is only to the Idps. Ideally, every survivor has the right to be given (PSS) in every community.
07:30
Adamawa Daily Reports
Special Report
Email ThisBlogThis!Share to TwitterShare to Facebook