Adamawa at 25: Governor Bindow Call for peace and unity

The Governor stated this during  a statewide  broadcast  to mark the celebration of Adamawa state @ 25 for being  created  out of former Gongola state.
He explained that his Administration has made  its  modest contribution  in the construction and rehabilitation of  over Sixty -Six  Roads  within Yola metropolist  and Mubi Town in just Fifteen  Months while in office, stressing that  work has already  commenced  on various  roads construction in the  southern  zone  including the  37.5 kilometer Kiri -Shelleng road. 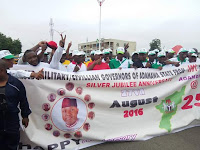 According to the  Governor, the  state  government will  engaged  thorough  face-lift  and Rehabilitation of all  General  Hospitals  in the state.

Talking on agriculture, he    revealed that the  sector  will soon  witnessed a  tremendous  revolution since the  creation of Adamawa state  Twenty five years ago, adding that the state  government has  procured  over One Hundred  new Tractors, Farming  equipments  and Agro- Chemicals to boost farming activities.

Governor Jibrilla also  said that the  state Civil service  had received a  greater attention  through  its policy  of e- payment  of  salaries  for both state and Local Government workers.

On the Internally Generated Revenue, Governor Muhammed  Umar Jibrilla  reiterated the commitment of his administration to  tow the  path of  progress  and development  despite the enormous  economic  challenges  facing the  entire nation.  He pointed out  that for the past Twenty five years, Adamawa state  witnessed  alot of challenges  which  includes the  occupation of Seven Local governments areas by insurgents.
He however called on the people of Adamawa state to continue to support his government for the overall development of the state.