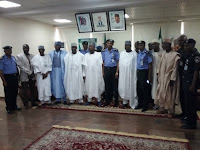 Security agents in Adamawa state  have been commended for their efforts in maintaining peace and security in the state.
Governor Muhammed Umar Jibrilla  made the commendation when  the newly posted Assistant Inspector General of Police in charge of zone  3  Yola  Alhaji  Usman Abubakar  Tilli  paid him a courtesy  call at his office  in government house Yola.
The Governor  described  Adamawa state as  the most peaceful  state  in the North East sub-region, and promised to  continue to give all the necessary support  to the state police command  at all times.

While congratulating the newly posted AIG  over his recent appointment,  Governor Jibrilla  assured  security  agencies in  state his administration support and cooperation  towards maintaining peace in the state. 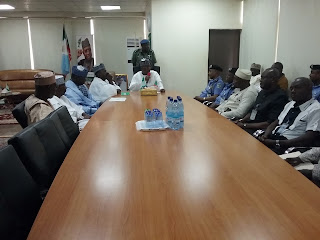 Earlier the  newly posted Assistant Inspector General of Police Alh. Usman  Abubakar Tilli said he was at  the government house  on a courtesy visit  and to commend the the present administration under Governor Muhammed Umar Jibrilla for his giant strides in developing Adamawa state within shortest period of assuming office.
He however  commended the state government  and the state  Independent Electoral Commission  for conducting  a peaceful,  free  and fair local government  election in the state.