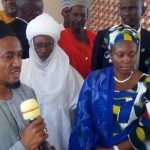 College of Nursing and Midwifery Yola has held its 1st public lecture Thursday at the college multipurpose hall. The lecture was the first of its kind since the establishment of the college, which is now 41 years old.

In his welcome address the provost of the College  Malam Abubakar Salihu Sadiq said “without fear of contradiction, my four years of as provost of this College was the best of time, in terms of success the college had ever experienced.”

The college has attained the full and final accreditation this year and gain  70% to 100% scores in both the nursing and midwifery examinations.
“College  of nursing Yola was the best among the only three colleges of nursing being run by the states government in the country he added.

Adamawa, Kano and Jigawa are the only states  that have attained full and final accredited in the entire Federation; followed by Enugu State.
Mr. Sadiq  said despite the college  accreditation status,  the college cannot admit more than 50 students owing to the workforce constraints. He urged the state government to allow some waiver for replacements and employment of both teaching and non teaching staffs in order  to meet up with the requirement of admitting more students.

“His Excellency is here with us, we are appealing for  state government  intervention in areas by of water, renovation of hostels and completion of abandoned projects including asphalting of road in the college.”

Public lecture became necessary owing to a shift from conflicts among health professionals, sometimes purely on reason of remuneration, to the popular demand for intellectualism and enlightenment with a view to creating awareness on the general public about nursing as a worthy field of study and a noble profession whose service entirely humanitarian, hence selfless.

He commended Dr. Muhammad Arabi Tukur for the selfless service in teaching nursing students for over 2 years in the college free of charge as part of his social responsibility to his immediate community.
For that, the college community has found it deemed fit to honour Dr. Arabi with a merit award of excellent, which was presented to him by Alh. Muhammad Mo-Allahyidi the District Head of Yola being assisted by Alh. Lawal Tukur the Chairman Governing Board of the college on behalf of its community

Diabetes is a killer disease for which knowledge is for the most part, being ignored. Dr. Arabi argued that there is more to creating awareness about diabetes in general as a preventive measure than any thought about its medication.
In his remarks, His Excellency Governor Muhammadu Umaru Jibrilla Bindow commended the efforts of the provost whose tenure would end in few days. He however, said Mr sadiq  services as provost of the college will be renewed to enable him  complete the wonderful job he was doing and directed provost to raise a memorandum  that a memo for his necessary action.

Governor Jibrilla  commended President Muhammadu Buhari for his efforts towards  lasting peace and security in the North East region and the nation at large.
The college has built a sickbay and has named it after Dr. Muhammad Arabi Tukur for his outstanding contribution in rendering effective and efficient healthcare delivery services throughout. Dr. Arabi was the first person to establish a private hospital under the defunct Gongola state. Matco Clinic is till this day, a private health service provider.