Home » News » NEWS:Gov. Bindow flagged off the airlifting of 1500 Christian Pilgrims in Adamawa

NEWS:Gov. Bindow flagged off the airlifting of 1500 Christian Pilgrims in Adamawa

The Adamawa State Governor, Senator Muhammadu Umaru Jibrilla Bindow has flagged off the airlifting of over 15000 Christian pilgrims in Adamawa state at Yola International airport the venue of the events Bindow enjoined them to be good ambassadors of the state by demonstrating the character of a good christian.
He while shaking hand with 356 pilgrims who departed with the first flirt yesterday around 8:45am he pleaded with them to pray for President Muhammadu Buhari and the entire country for God to take us out of economy recession victorious.

The Executive Secretary Nigeria Christian Pilgrims Commission (NCPC), Rev Tor Ujah who officiate the flagging with entourage from Abuja, appreciate the effort made by Governor who has made history in the entire country to sponsored over 1500 people to the holy land of Israel. 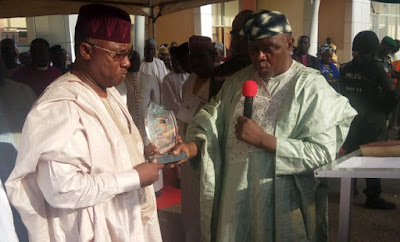 According to him, this event is the first of it's kind in the history of Adamawa State since it's creation for a Governor to sponsor people of this magnitude to Jerusalem for spiritual exercise.

"Bindow is a friend of the church, what he did, it has never been done since the inception of this state, he made us proud even in the entire country is the only Governor that is able to sponsor people of this number to Israel."Puja said .

He Further said that Governor Mohammadu is a indeed working as he can see development here and there unlike before in the state.

He specially thank the Governor and present gifts, asked the cheering faithfuls to stand up and say a special prayer for him to succeed.
''Your excellency may God bless you, for what you deed may you forever be remembered for good, May God you what you have not asking for, your God open doors for you to the right and to the left,may Adamawa state be the head and not tail, may Adamawa leaders be the heads and not leaders."Puja prayed
17:44
Adamawa Daily Reports
News
Email ThisBlogThis!Share to TwitterShare to Facebook