The third meet- the people Exco meeting paradigm shift of the Bindow administration was held in Mubi last week. The shift which has provided a platform for problem solving is already proving effective as the Mubi experience has shown. The meeting which was held at the premises of the State University was able to shoot dawn the festering crisis   of corruption at the University.

The State Council meeting was earlier held in Numan and Fufore within the South and Central Senatorial Zones respectively.  It was also significant to the government because it provides the rare opportunity to interact with Local Communities on burning issues that affects various localities.

Prior to the Mubi Council meeting held in Northern Senatorial Zone which harbours the Adamawa State’s University, tension and anxiety were high owing to the lingering crises that have almost crippled the growth of the centre of knowledge.

The rumours making rounds within the University were that the hosting of the Council meeting by the Adamawa State University was primarily intended to sack the serving Vice Chancellor or to close the University.

However, the outcome of the meeting was not only shocking but an expression of wisdom, experience and unquestionable capacity of the number one citizen to calm down frayed nerves by strategically dealing with the issues that threaten  the University.

During the open preliminary session of the Council meeting, the Governor expressed his disappointments with the happenings at the University emphasizing that the University is witnessing monumental financial fraud perpetrated by the past administrations of the University, high level academic fraud and exam malpractices.

As a Governor with Zero tolerance for corruption, Governor Bindow announced the constitution of a 5-man-visitation panel to look into the issues of corruption for the purpose of repositioning the institution on the path of progress.

He said that for the government to venture into road construction and rehabilitation within the University community, it will be dependent on the recovery of all looted funds meant for the University especially the N172 million road contract awarded to the Mauritalia Indigenous Company.

However, the Governor said that the government would look into the demands of the N580 million for the running and accreditation of some Academic programmes of the University.

The Governor who was responding to a passionate appeal made by the Commissioner of Information and Strategy, Comrade Ahmad Sajoh to improve the road network within the University community, said that the major Agenda for the choice of the venue of the State Council meeting at the Adamawa State University, Mubi was to make positive appraisal of the challenges  of the University to create an express way for accelerated growth of the University.

According to him, he has great concerns for the University saying that, “the University is greater than any one.  I have special interest in the growth of this University; I have not made a mistake in the appointment of the Vice Chancellor.  I also have confidence in the ability and integrity of the leadership of the Governing Board of the University”.

Earlier in his welcome address  the Vice Chancellor of the University, Dr. Moses Zira Zaruwa acknowledged the determination and commitment of government to inject new life into the educational sector, through the declaration of the state of emergency and intermittent interventions adding that this action had no doubt stimulated public confidence in the ability of the government to reposition the University.

The Vice Chancellor who described the University as a foremost institution in the North-East Region owing to its establishment fourteen (14) years ago, however regretted that some upcoming Universities that, looked up to ADSU as a model are making tremendous progress compared to the age long University.

He intimated that the University in 2012 was rated as one of the best Universities with all its programmes fully accredited and its graduates competing favourable with their peers internationally as evidenced by the securement of jobs with WHO and Globacom.

He therefore sought for interventions from the Adamawa State Government to facilitate the accreditation of twenty-four (24) under graduate and post graduate programmes proposed for May 2017 emphasizing that the programmes which were matured for accreditation by November, 2016 suffered some setbacks due to activities of insurgents in the entire North-East.

Addressing Journalists on the outcome of the state’s council meeting, the State Commissioner of Information and Strategy, Comrade Ahmad Sajoh in company of his counterparts from the Ministries of Higher Education and Local Government Affairs, revealed that the Adamawa State Government has approved over N300 million naira for the installation of street lights on Mubi major streets to enhance the beauty of the commercial town.

He also intimated that the government had approved a life line for the moribund Burnt Bricks Company to bring it back to its feet because of its significance to the infrastructural development of the State, emphasizing that the Universal Basic Education will be working in collaboration with the Mubi Burnt Bricks to develop our infrastructure in schools.

Though the financial commitment of the state government to the project is not immediately known, Comrade Ahmad Sajoh said that the State Government has approved its intervention in principle emphasizing that government’s financial commitment to Mubi Burnt Bricks will be dependent on the proposal and financial requirements of the company to remain afloat.

In another development,  Governor Muhammed Umaru Jibrilla commissioned one hundred and five tractors for onward distribution to the twenty-one Local Government Areas of the State.

While commissioning the tractors at the Mahmud Ribadu’s Square recently, the Governor expressed government's readiness  to key into the Federal Government’s Policy in the diversification of Agriculture through farming to feed the nation, stressing that the tractors are meant to boost mechanize farming  in the state.

He charged all Local Government Chairmen in the State to embark on maintenance culture and warn against leasing the tractors to only well to do as was hitherto the practice.

The Governor mandated the Commissioner for Agriculture and Local Government and Chieftaincy Affaires to tour the Local Government Areas in two months time to assess the utilization of the tractors, stressing that there are many agricultural packages in the pipe line.

The Chief of Staff, Alhaji Abdurahaman Abba  in a goodwill message said the commissioning  of  the 105 tractors was the fulfilment  of the campaign promises made by the governor  adding that the effort is a tip of the ice berg on Agricultural Programme  to be initiated by the present government and called on farmers and the people of the state to give their maximum support towards achieving success.

Alhaji Abdulrahaman disclosed that the state government is currently  embarking on road construction across the state, already renovation work has started on  Yola Specialist Hospital and General Hospitals in Numan, Mubi and Ganye will follow suit, adding that the state government is doing well in the educational sector by declaring the state of emergency, renovation work will soon be beginning in many schools across the state.

Also speaking, the Lamido Adamawa Alhaji Dr. Muhammadu Barkindo Aliyu Musdafa lauded the effort of the governor for procuring the tractors saying that it will help in no small way in boosting farming  in the state adding that the governor has in his one and half years in office transformed the state for the better.

Earlier, in a welcome address, the Commissioner for Local Government and Chieftaincy Affaires, Honourable Mustapha Barkindo Aliyu Musdafa said that the 105 tractors  were procured in line with the Federal Government’s Policy thrust in boosting Agriculture and reducing dependance on crude oil. He disclosed that each unit of tractor was purchased at the cost of N12,491,188.12 maintaining that the price was high as a result of the fall in the value of the Naira against the dollar. 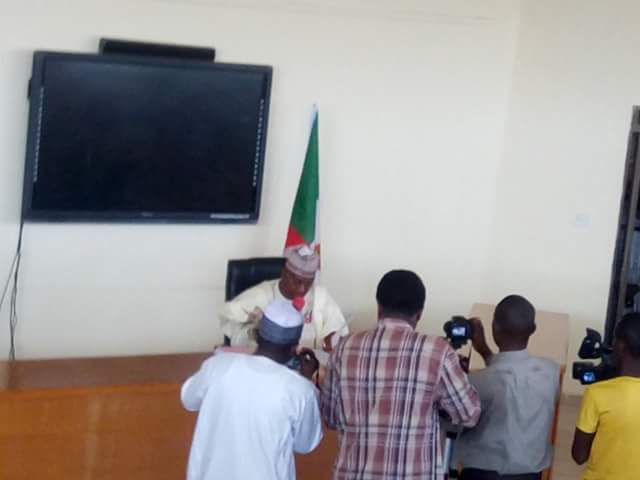